A Glimpse at Tradeshow History (February)

1909 – Tradeshow tables anti-Japanese legislation
On February 10, 1909, both houses of the Washington State Legislature resolved to table proposed legislation requiring visitors from Japan who attend the Alaska-Yukon-Pacific Exposition to post a bond for their return to Japan.


This is done at the request of acting Governor Marion Hay, 1865-1933, who had been contacted by Secretary of State Robert Bacon, 1860-1919. Bacon sought to prevent any anti-Japanese bills from being introduced into the Legislature in order to preserve good relations with Japan’s government.

The Alaska-Yukon-Pacific Exposition, a world’s fair held on the University of Washington campus in 1909, promoted trade with the later-named Pacific Rim. Organizers hoped to make Seattle a hub for trade with Asian countries and to open their markets to Washington products.
Source: www.historylink.org 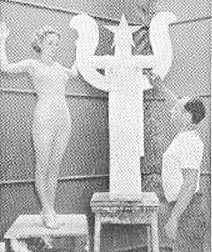 In 1937, the Pan-American Exposition announced that only brunette “Latin types” would be hired as “Texanitas,” the official hostesses of the Exposition. To Helen Ramsey, a Texas Centennial Exposition Rangerette and 16-year-old blonde, this was unacceptable.

In February 1937, she organized six fellow blondes to protest. On February 15, Ramsey and her comrades marched into the mayor’s office. She announced that they had an appointment, as they walked past the receptionist and promptly established themselves in Mayor George Sergant’s inner office. By the time he arrived, they were already firmly entrenched and the sit-down strike had begun.

The girls remained as spectators in the mayor’s office while official business of the day was carried on. It was reported that city officials were amazed and amused at the strike.

“We are going to stay here until the mayor gets exposition officials to recognize blondes,” said Ramsey. “Blonds and redheads are just as typical as brunettes, and we want jobs and refuse to be discriminated against.”

As a result of this spectacular strike, blonds were assured equal chances for Texanita positions at the Pan-American Exposition.
Source: www.dallashistory.org.

1982 – The first farm show facility built
With the increase in international exhibitors and visitors at the California Farm Equipment Show in Tulare, Calif., the United States Department of Commerce sensed an opportunity to enhance the U.S. export trade possibilities.

The Department of Commerce designated and publicized the show throughout the world as an official affiliate of the Foreign Buyer Program. Throughout the 1970s, the show continued to grow, eventually leading to a shortage of space at the fairgrounds. So, in 1976, the show directors voted to explore the formation of a special corporation that would establish an international agribusiness show place somewhere within the Tulare area. A non-profit corporation was created, the International Agri-Center, Inc., and a new site for farm show was designated.

The 15th California Farm Equipment Show and International Exposition opened its doors on the new show grounds, February 9, 1982. This new location provided Tulare with the first facility in the Western United States ever constructed to house an agricultural tradeshow and other farm-related events.
Source: www.worldagexpo.com

1997 – GES Launches Online Service kits
The tradeshow industry’s largest general contractor has become the first in the industry to launch online service kits over the Internet. GES Exposition Services Inc. introduced the new INTERKIT, making it easier and faster for customers to order the services they need for the show. The product was available on the GES website, which was also the first in the industry, at www.gesexpo.com.

Clients who have access to the internet can use the INTERKIT to electronically order rental displays, carpet, freight, labor, electrical and other show services, and accessories. 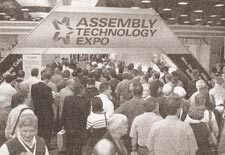 2004 – Robots co-locate at Rosemont
Two of the world’s leading manufacturing tradeshows announced a blockbuster co-location plan for 2005. The International Robots and Vision Show and the Assembly Technology Expo will be held side-by-side on September 27-29, 2005, at the Donald E. Stephens Convention Center in Rosemont, Ill.

More than 15,000 professionals are expected to attend the co-located show. 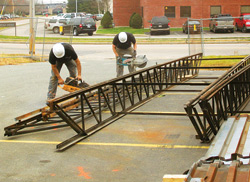 The Saturday night fire started on the second floor and spread through various parts of the office, triggering a silent alarm at a nearby fire station.

Fire crews responded quickly and most of the damage was related to smoke and water. Willwork said much of its equipment and supplies were saved. The warehouse area was affected only by minor soot and smoke.

“Adverse circumstances often reveal the heart and soul of a company and, watching the complete responsiveness of these remarkable people, this certainly shows ours,” said William Nixon, Willwork’s president and owner.

By Sunday morning, Willwork employees were on site assessing and reacting to the fire. Personnel removed warehouse items, boxed office material, made temporary and long-term plans, and ensured vital functions and immediate needs were addressed.