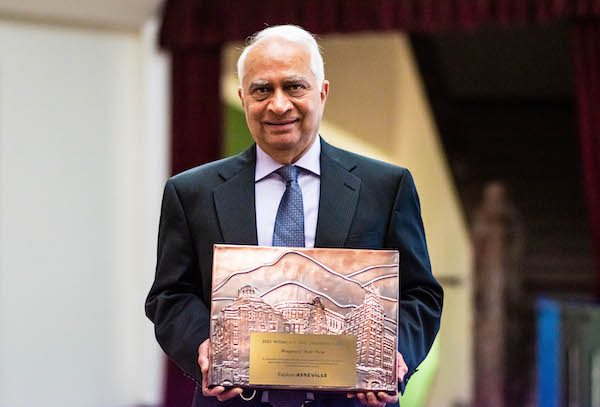 A self-described “accidental hotelier” has been honored for his leadership, creativity and commitment to the tourism sector and the community by the Buncombe County Tourism Development Authority.

Bhagwanji “Bob” Patel was presented with the William A.V. Cecil Tourism Leadership Award at the authority’s annual meeting on September 15 at Thomas Wolfe Auditorium, joining 21 other award recipients who’ve been recognized over the years for their exceptional leadership in making the community a special place to live and visit. Patel is president emeritus of Virtelle Hospitality, his family-owned and operated management company that has relationships with Hilton, Marriott, IHG and Choice Hotels.

As he shared with audience members in accepting the award, Patel’s path to a successful career in hospitality was not what he had in mind when he emigrated from India to New York City in 1969 in pursuit of a higher education, knowing little English at the time.

After graduating with honors in just two years, a decade working as a structural engineer and having been granted citizenship, Patel and his family purchased their first hotel: a 72-room Howard Johnson’s hotel in Pensacola, Florida. “I had no idea what I was getting into. I became an accidental hotelier,” says Patel, who said he intended to return to his career in structural engineering in six months.

But with small children and an extended family dependent upon him, he found himself staying in the industry to open doors and provide career options for them. In 1981 he bought a second hotel–an Econo Lodge in east Asheville–and thus the Patel family moved here, despite reservations expressed by his wife. “Asheville was completely down back then,” Patel relayed. “Half of downtown was boarded up.”

The hospitality industry became more than a business for the Patel family; it became a way of life. Today the family owns and manages five lodging properties in Buncombe County, including the newly opened Element by Westin, with Patel’s daughter Swati and her husband Himanshu Karvir at the helm. Patel served as a member of the Buncombe County TDA for six years, from 2009 to 2015, two of those years as board chairman.

“Under Bob’s leadership, this family and their teams have worked tirelessly to provide exceptional service in all aspects of their properties. It is a dedication that overflows into giving back to our community,” said former BCTDA chair Gary Froeba, in presenting the award. “We are delighted today to recognize this dedication. Thank you, Bob, for all you have done for our industry and our community.”

Created in 1999 as a tribute to the late William Amherst Vanderbilt Cecil, owner of Biltmore Estate and a champion of its preservation and success, the coveted tourism leadership award honors those who have made it their mission to help guide the sector in Buncombe County.

Last year, the award went to Asheville Independent Restaurant Association, better known as AIR, whose members have shaped Asheville’s reputation as a unique culinary destination. Other past recipients include Karen Cragnolin, longtime former executive director of RiverLink, spearheading redevelopment along the French Broad River; Oscar Wong, pioneer of the local craft beer movement and founder of Highland Brewing; the late N.C. Senator Martin Nesbitt, sponsor of the room tax bill in 1983 to fund a full-service destination marketing organization and create a comprehensive strategy to market Asheville and Buncombe County; and Gary Everhardt, longtime superintendent of the Blue Ridge Parkway, who succumbed  to COVID-19 in late 2020.  View a complete list of award recipients here.