“Acts of Valor,” Representing MOH Recipients’ Heroism, to be Auctioned at 2017 MOH Convention 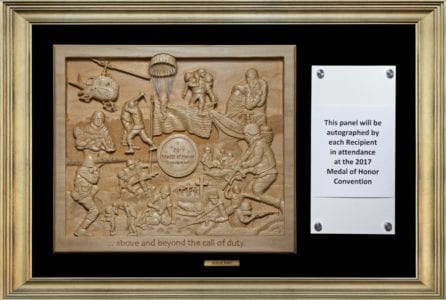 In great respect and gratitude to our Congressional Medal of Honor recipients and their brave acts of courage, internationally known representational artist, Don Woodard, has created a relief wood sculpture titled, “Acts of Valor.” This work of art will be signed by each of the recipients in attendance at the 2017 Medal of Honor Convention, and will be auctioned as a fund raiser during the Convention, September 12-16, in Pueblo, Colorado.

The scenes represented in “Acts of Valor” depict various acts taken by members of our military, for which they were awarded the Medal of Honor. These acts were selected after reviewing numerous recipient citations, and although no one person’s actions was chosen, acts that had some similarity by several recipients are represented. “Acts of Valor” was unveiled to the general public in Denver in January, and after looking at the work-of-art, a number of people were brought to tears. Many veterans were very impressed and thanked Mr. Woodard for creating this relief wood sculpture. Woodard has expressed that it was an honor to do so, and it is the most detailed relief wood sculpture that he has created, taking more than 180 hours to complete.

Tickets for the Cattle Baron’s Gala/Patriot Award Dinner being held at the Medal of Honor Convention went on sale March. During the convention, there will be a free, open to the public, autograph session with all of the Medal of Honor recipients in attendance. For more information visit http://pueblomoh2017.org/.