This was a one day show, produced in a way to offer event organizers and designers attending abundant time to interact with vendors as well as attend workshops and network. The show closed with a high impact party at Belasco in downtown LA which saw grown-ups eating cotton candy while colored lights went off in the center and robots danced, the latter brought to life by Rolando Espinoza of Champagne Creative Group, Las Vegas. 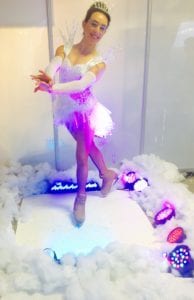 There was a rainbow of creative ideas presented by exhibitors, from an ice rink the size of a charging station formed of a material that does not melt (photo at left), complete with skater, by Ice Creative Entertainment, to a life size motorcycle in perfect detail made out of balloons designed by Addi Somekh of New Baloon Art.

There was ice cream made in a few seconds using nitrogen sprayed into a bowl of ingredients by Benjamine Fernebok, founder of Super Cool. And Bill Hinchliff, president and CEO of IPME, showed how to build a city or an office from containers.

Adam Manacker from Fill R Up Gastro Garage set up a gas station full of guys with blow torches (photo at top right), some large, some small, and welding glasses that filled attendees up with savory brioche style doughnuts with creams and cheeses, and then topped them with ingredients to form delights from pizzas to Cubanos. Fun presentation!

The Long Beach Convention and Visitors Bureau had an elegant display of outdoor, indoor facilities and an excited staff on board, no one more so then President and CEO Stephen M. Goodling.

These are just a few of the many things that went on during BizBash Los Angeles, 2016. For a more complete scoop, look to the upcoming September print edition of Exhibit City News.

And then get ready, because BizBash New York is coming up next!