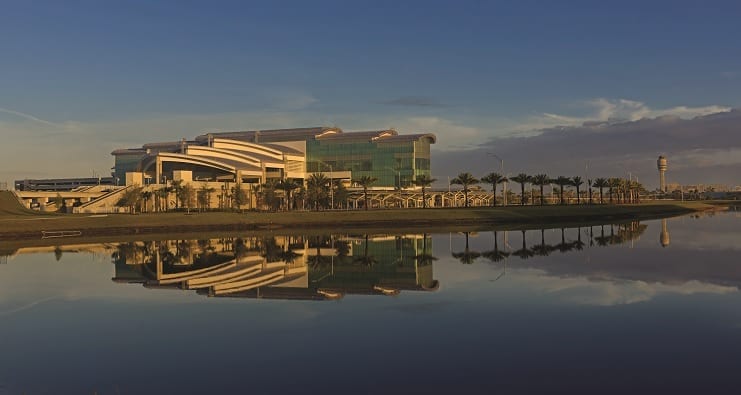 Year Opened: The airport was originally a military airfield but began operating as a limited joint military/civilian airport to accommodate jets in 1962. The military slowly shut down the base in the early 1970s and ceded it to primarily civilian use in 1975.

Transportation: A bus connects the airport to Sunrail, a north/south local rail that goes from DeBary to Kissemmee. Local shuttles connect the airport to several communities an hour or more away, with a NE shuttle that goes to Daytona Beach and as far as Palm Coast,  a SE shuttle that goes to Cape Canaveral and as far as West Palm Beach, a SW shuttle areas including Tampa and a NW shuttle to Sevareid bedroom communities ending at The Villages. LYNX buses go to downtown Orlando, the convention Center and other destinations. Taxis, rideshares and limousine services are available. Some cruise lines also offer bus service to Cape Canaveral Port for ticketed passengers.

Wi-Fi: Free WiFi is available by connecting to the “MCO Internet” network. Internet kiosks are available airside near the gates and there are a few landside on Level Three.

It’s IATA designation, MCO references McCoy Air Force Base. Colonel Michael Norman Wright McCoy, commander of the 321st Bombardment Wing of Strategic Air Command, was killed in 1958 during the annual Bombing and Navigation Competition and the base was renamed in his honor.

Although it is primarily a civilian airport there are still some military operations located on the site, including the 164th Air Defense Artillery Brigade from the Florida Army National Guard, an Army Reserve intelligence unit, the 1st Lt. David R. Wilson Armed Forces Reserve Center supporting multiple units of the Army Reserve, Navy Reserve and Marine Corps Reserve, and a large Navy Exchange for active, reserve and retired military personnel and their dependents.