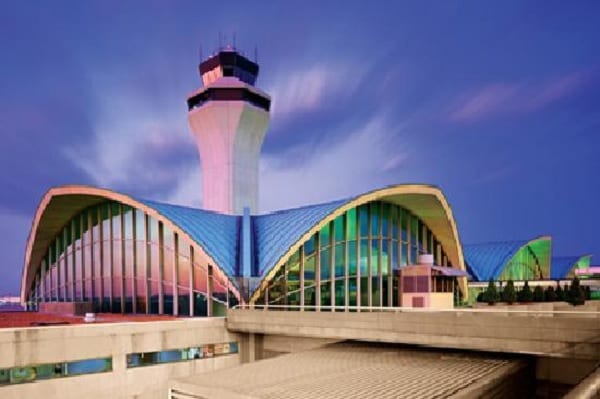 Year Opened: The airport began as a balloon launching base in the 1890s called Kinloch Field. Major Albert Bond Lambert and the Missouri Aeronautical Society leased 170 acres of farmland to serve as an airfield for St. Louis. Lambert financed the project and had the site cleared, graded and drained, and had the first hangar built at his own expense. It was officially designated as an airfield in 1923, when it became Lambert-St. Louis Flying Field, but many aircraft had already been using it before then. In 1925, Lambert bought the field and added hangars and a passenger terminal. In early 1928, the City of St. Louis leased the airport for $1 and later that year, Lambert sold the airport to the city outright, making it one of the first municipally-owned airports in the U.S. In 1930, the airport was officially christened Lambert-St. Louis Municipal Airport. A new terminal was designed in 1953 and completed in 1956. The terminal was expanded in 1965 and became Lambert-St. Louis International Airport in 1971. Several expansions greatly increased the size of the facility and added another runway over the years. In 2016 the facility acquired its current name, putting “St. Louis” at the start of the name to emphasize the location of the airport.

Size: Airport covers 2,800 acres with four runways. It has 81 gates in two terminals.

Fun Facts: The airport’s namesake was the son of the founder of Lambert Pharmaceutical Company which made Listerine. He was an Olympic golfer. His rank was primarily honorary, bestowed by the Aero Club of St. Louis.

The Wright brothers sold Lambert his first plane in 1911 and Orville himself was Lambert’s flight instructor. Lambert had the first pilot’s license in St. Louis. Later the brothers and their exhibition team visited the field while touring with their aircraft.

In October 1910, a year after he left office, Theodore Roosevelt visited the airport and flew with pilot Arch Hoxsey, thus becoming the first U.S. President to fly.

In 1912 Captain Albert Berry made the first successful parachute jump from an airplane. To achieve this, he had to climb under the plane in mid-flight to secure himself to the parachute.