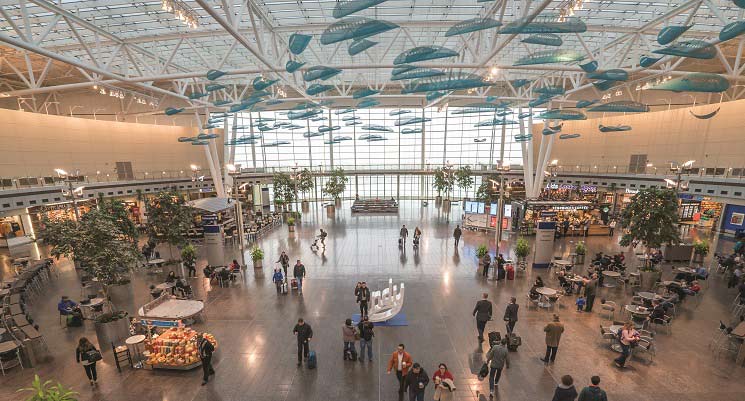 Year Opened: It opened as Indianapolis Municipal Airport in 1931. In 1944, it was renamed Weir Cook Municipal Airport, after U.S. Army Air Force Col. Harvey Weir Cook. In 1976 it returned to its original name.

Size: The airport covers 7,700 acres with two runways and 40 gates. In 2017 a record-breaking 8.8 million people came through the airport, making it the 46th busiest in the country. The five-floor parking garage covers 11 acres on each of its levels and features a light-filled center atrium complete with a piece of suspended artwork and moving sidewalks to speed pedestrians into and out of the terminal building.

Transportation: In addition to the usual bus service between the airport and downtown, hotel shuttles, taxis, charter services and ride shares, the Indianapolis Airport offers BlueIndy, an electric car-sharing service that connects its customers from the airport to destinations around the city of Indianapolis. Eight rental car operations and the Ground Transportation Center (where information about limousine, shuttle bus, hotel courtesy vehicles and other transportation services such as IndyGo bus service can be obtained) are located on the first floor of the attached parking garage. All pick-ups and drop-offs of rental vehicles also occur here, eliminating the need for shuttling customers to and from individual companies’ remote processing facilities.

Fun Facts: IND was recently named the best in the U.S according to Condé Nast Traveler’s list of Best Airports in America.

Col. Harvey Weir Cook, the one-time namesake of the airport, fought in WWI in Captain Eddie Rickenbacker’s famous “Hat in the Ring” 94th Aero Squadron. He was such an aggressive pilot that he was twice cited for attacking formations of multiple German fighters by himself but that same gung-ho attitude resulted in his being awarded the Distinguished Service Cross with Oak Leaf Cluster.