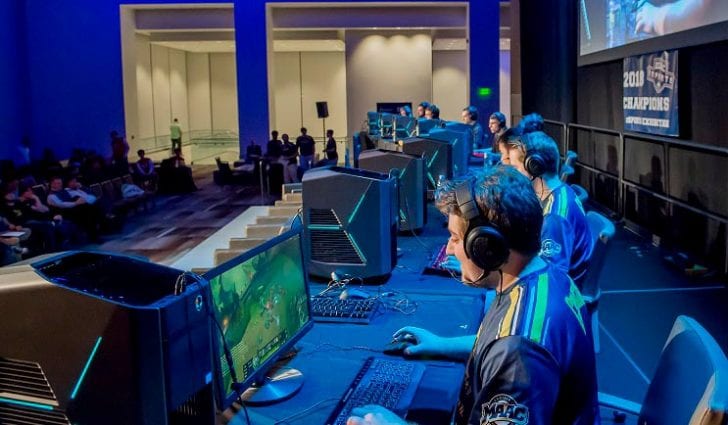 The largest collegiate esports event in the Northeast is coming to Albany, New York next year. The Albany Capital Center (pictured above) joined with the Center for Economic Growth (CEG), Eastern College Athletic Conference (ECAC) and Metro Atlantic Athletic Conference (MAAC), to announce the Hudson Valley Gamer Conference 2019. The event will be held on March 30-31, 2019, at the ACC, a new $78 million, 82,000-sq.ft. convention center in downtown Albany and at the center of a thriving video game hub.

Details including event date, participating teams, featured game titles, fan activities and vendors as well as event branding were revealed at a press conference at the ACC. This event has plans to highlight the Capital Region as a destination for gamers, esport fans and software developers alike. The conference and expo will feature seating for more than 800 guests to watch the ECAC Esports Championships featuring three popular game titles including League of Legends and Overwatch. A third title will be revealed in the coming months.

“We are excited to partner with the ECAC and MAAC for the first ever HV Gamer Con,” says Doug McClaine, general manager, Albany Capital Center. “We feel privileged to collaborate with these conferences that are at the forefront of bringing esports to the collegiate market. It’s always been our goal to get involved in this industry in some capacity and we are thrilled we can bring an event of this stature to our region.”

Additionally, there will be an expo that caters to the regional gaming and esports community, featuring up to 50 vendors. The expo has plans to showcase regional game development studios, Empire State Development’s Digital Game Hubs at Rensselaer Polytechnic Institute and New York University, college programs focused on games and esports, local artists, independent developers and other esports lifestyle brands. Portions of the expo will feature hands-on gameplay and retail vendors.

“As a leader in intercollegiate esports competition, the ECAC is thrilled to be partnering with the MAAC, the Albany Capital Center, and the Center for Economic Growth to bring this very special esports showcase to Albany,” says Dan Coonan, president and CEO, Eastern College Athletic Conference. “Last year’s event was spectacular, and this year’s promises to be much bigger and even better. We appreciate the support of our partners in making this happen, and we look forward to allowing people to see what the future of big time intercollegiate esports looks like.“

HV Gamer Con aligns with a regional strategy of attracting new gaming studios and supporting the development of new spaces for existing companies. Along with area colleges, regional game development companies continue to foster an environment in which software developers thrive and make the region more attractive to graduates of local colleges such as Rensselaer Polytechnic Institute’s nationally acclaimed Games and Simulations Arts and Sciences (GSAS).

“Over the last two decades, the Capital Region has revolutionized the video game industry with cutting-edge games and industry support from our existing production studios,” says Andrew Kennedy, president and CEO, CEG. “Hudson Valley Gamer Con will enhance CEG’s efforts to showcase the regional assets that enable video game companies to be successful and thrive here. This event will also show esports participants and software developers that the Capital Region is a great location to get a college education and for rewarding careers with our local studios that are eager to find the best talent.”

“The Capital Region has come a long way since my brother and I founded Vicarious Visions over 25 years ago,” says Karthik Bala, co-founder, Velan Studios. “We were really the first developers in our area. And while the industry is dynamic, the tech cluster has gained momentum and we’re seeing some pretty solid organic growth locally, it’s not enough. We need to attract and retain more talent as the competition is fierce and we don’t want to lose it.” Vicarious Visions was sold to video game giant Activision in 2005.