The Albany Capital Center is pleased to share news of its success, hosting 83 events since opening its doors on March 1, with 47 contracted events still to come this year for a total of 130 events scheduled in the first year alone. The total events for 2017 span 184 event days and result in 4,225 booked hotel room nights, bringing upwards of 60,000 guests to downtown Albany. SMG, Albany Capital Center operator, continues to aggressively market the facility to bring more business to the Capital Region, with events in the pipeline through 2019 and beyond.

“It’s been a rewarding experience to be a part of the opening of this property and watch it come to life through the various events we’ve hosted here to date,” said Doug McClaine, general manager, ACC. “Witnessing the space’s versatility while collaborating with clients to bring a variety of exciting events to this area has truly been gratifying, especially when they turn around and book their event for future years. We’re thankful to the team at the Albany Convention Center Authority for their vision and dedication, as well as the many officials in Albany who helped make this a reality.”

Since the ribbon cutting, the ACC has played host to a variety of events and groups, showcasing the facilities’ versatility, many of which were new to downtown Albany. Among the new events, the Leet Systems ANYCON attracted 120 industry leaders; the Hudson Valley Agri-Business Development – 3rd National Farm Viability Conference drew 275 people and exhibitors from 28 different states; the Empire State Society of Association Executives, a premier conference and trade show for association and meeting professionals, brought 500-plus attendees to the area; the ACC also played host to its first wedding this summer and switched gears again to accommodate 400 attendees who watched the Albany All Stars Roller Derby league. This November, 2,000 guests are expected to visit the Capital Complex and use nearly 160,000 square-feet of combined meeting/event space for the Capital Region BOCES meeting. The Capital Complex, comprised of the Empire State Plaza Convention Center, The Egg, the ACC and the Times Union Center, is the largest meeting space in upstate NY.

“We’re thrilled with the progress thus far, as the Albany Capital Center was a project years in the making,” said Megan Daly, interim chairperson, Albany Convention Center Authority. “We’re looking forward to the great things it will continue to mean for the City of Albany and the Capital Region more broadly.”

“The Capital Center is introducing business to Albany that has never been here before and also providing the opportunity for some important current clients to grow their business and become more valuable to our destination,” said Michele Vennard, president and CEO, Albany County Convention & Visitors Bureau. 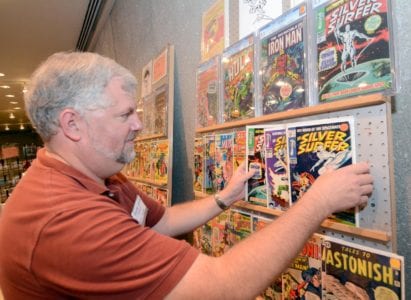 Looking forward, the ACC is already booking one-, two- and three- years out. Beginning with the spring of 2018, the ACC will host the Empire State Comic Con for a three-year run, with an option for an additional two years. Slated for April 6 through 8, 2018, the event will utilize the entire building and is expected to draw more than 5,000 people.

“Altered Reality Entertainment, producer of the event, is excited to bring its historically popular events to Albany,” said Susan Soares, who manages press relations for the Altered Reality. “Fans can expect to meet current and legendary actors of the large and small screen, and other icons of pop culture, as well as talented comic book artists and cosplayers.” Altered Reality currently hosts similar shows in Colorado Springs and Providence, as well as Foxwoods and Hartford, Connecticut.

For 2018, 40 events have been confirmed thus far, spanning more than 86 event days. These events are projected to bring 19,500 and result in an estimated 3,110 booked hotel room nights in the Albany area. The New York State Public High School Athletic Association Boys Volleyball Championships, the center’s first athletic state tournament, will bring 700-plus athletes and spectators to the Albany area for the first time, having signed a three-year deal through 2020. March Madness will also be returning to the Times Union Center for men’s NCAA Tournament first- and second-round games in 2020, with the ACC slated to host the fan festival.

The ACC Sales Team is already working on securing events for future years, and has contracted 22 additional events for 2019 and beyond, which will result in another 53 event days and 4,800 hotel room bookings, bringing a projected 20,800 people to the downtown Albany area.

The ACC is interactive, utilizing both a real-time kiosk provided by the Albany County Convention & Visitors Bureau that includes updated information about what’s taking place in Albany on a daily basis and through original murals depicting Albany’s rich 400-year history. Artist Dahl Taylor has captured the energy and beauty of the region and chartered the growth of this great city from a small riverside settlement to a booming state capital.

When fully established in the market, the ACC is projected to bring an additional 150,000 attendees to the Capital Region and will have an estimated economic impact of $36 million, with added fiscal benefits of nearly $1 million annually for New York State, Albany County and the City of Albany.

The Albany Capital Center, operated by leading venue manager SMG, is a modern, premier event and meeting destination in New York’s culturally rich Capital Region. Connected to the Times Union Center, Empire State Plaza and Renaissance Albany Hotel via enclosed walkways, the convention center hosts a diverse array of trade shows, consumer and social events, and meetings for up to 5,000 guests. It boasts 22,500 square-feet of ballroom/exhibit space, six meeting rooms with 9,200 square-feet of space, and 13,500 square-feet of pre-function space, state-of-the-art technology, and impeccable dining options. The ACC is conveniently located in downtown Albany and within walking distance to the New York State Capitol, business and warehouse districts, performing arts venues, museums, shops, restaurants and nightlife. For more info about the Albany Capital Center visit www.albanycapitalcenter.com, or contact the sales department at (518) 487-2009 or shannon.licygiewicz@albanycapitalcenter.com.