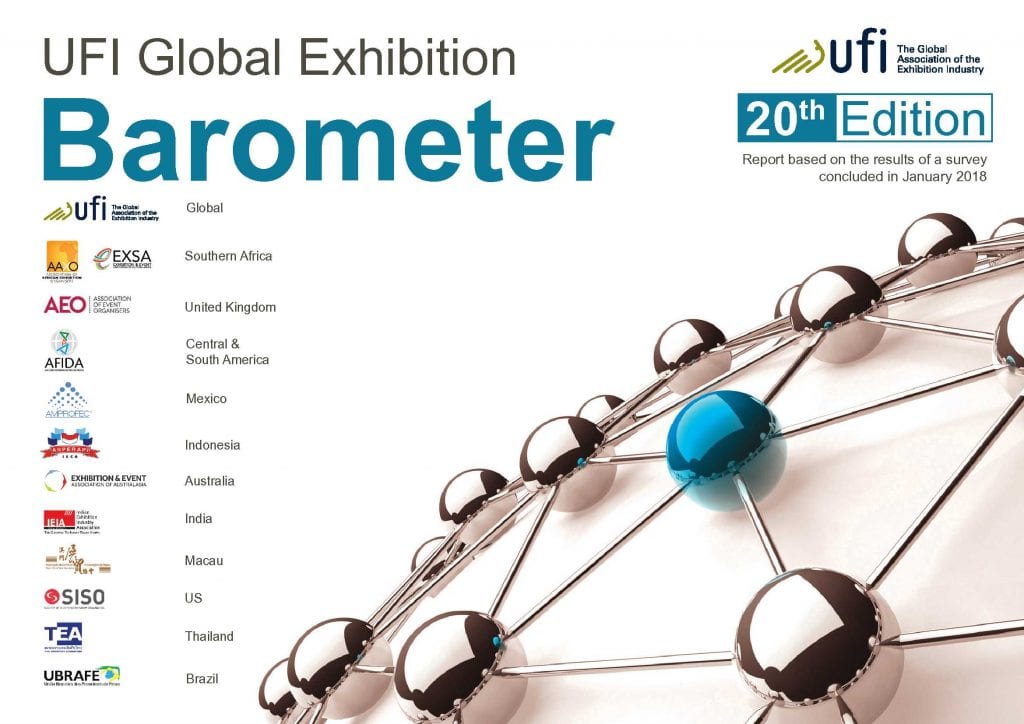 The 20th edition of UFI’s “Global Exhibition Barometer” reports strong results for 2017 and very good prospects for 2018 in terms of turnover growth. The top business issues remain the state of the economy in home markets, and global economic development–the first one rising in importance, the latter one’s importance declining. Results also indicate that a very large majority of companies are looking to develop new activities, while a significant proportion are also considering investments in new geographical markets. Revenue generated from new business models is expected to grow considerably in the coming years as the exhibition industry embraces evolving business models.

The 20th edition of the barometer added three new partners to UFI’s semi-annual industry research: the Exhibition and Event Association of Australasia (EEAA), Indonesia Exhibition Companies Association (IECA) and Macau Fair Trade Association (MFTA). The research presents a global overview of industry data, broken down into company types and 17 separate market profiles. This edition’s data is based on input from a record 290 participants from 53 countries and regions.

“Globally, the exhibition industry is growing at a healthy rate,” says Kai Hattendorf, UFI managing director/CEO. “Companies around the world are looking into expanding their activities within and beyond their present activities and geographic borders. In parallel, new business models are under development, and many players in the industry expect them to deliver a relevant share of their company’s revenues in the coming years.”

About 70 percent of companies around the world declared an increase in turnover for the second half of 2017 while 72 percent anticipate an increase for the first half of 2018 and 77 percent for the second half. Companies in several markets are well-positioned to out-perform these previsions in 2018: Brazil, Germany, Macau, the U.S. and the U.K., whereas a significant level of uncertainty still exists for many countries in Asia, including most parts of China. In terms of operating profit, most markets maintained or improved a good level of performance in 2017: 44 percent declared an increase and 43 percent a stable profit. A majority of companies declared an increase their operating profit in 2017 in nine of the markets analyzed: Brazil, China, Germany, Indonesia, Macau, Mexico, the Middle East, the U.K. and the U.S.

When asked about the revenue share expected from new business models including different event formats, digital revenues or marketing services, a majority of participants responded that they expect this revenue to represent between five and ten percent of total revenue in five years’ time, and more than ten percent in ten years’ time. One quarter of the companies is expecting these new business models to generate a share of more than 25 percent of their revenues in ten years’ time. Most notably, an above-average share is expected in the following markets: Australia, China, India, Indonesia, Macau, Mexico, Thailand, the U.K., and the U.S.

The top business issues for the coming year remain the “state of the economy in the home market”, (for 25 percent of the respondents), “competition from within the industry” (21 percent), “global economic developments” and “internal challenges” (16 percent each). This means that “global economic developments” have become less important than in previous years. Detailed results indicate that “competition from within the industry” is the top business issue in the following four markets: China and Macau, India and Germany.

In terms of the range of revenue-generating activities, a large majority of companies intend to develop new activities in either the classic range of exhibition industry activities (venue/organizer/services), other events (live or virtual), or in both of these areas: 72 percent in the Middle East and  Africa, 78 percent in Asia/Pacific and 88 percent in the Americas and Europe. In terms of geographical exposure, an average of four out of ten companies declared their intention to develop operations in new countries, and this is the case for a majority of companies in five of the 17 markets analyzed: the U.K. and the Middle East (67 percent), China (57 percent), India (53 percent) and Germany (50 percent).

“This is the 20th edition of our ‘Global Barometer’ and we are very pleased to report a record number of participants, allowing us to include data from 290 companies,” says Hattendorf. “We are also pleased to welcome EEAA, IECA  and MFTA as partners for this report. These partnerships have enabled us to add a new country profile for each of these markets.”

UFI – The Global Association of the Exhibition Industry is the leading global association of the world’s trade show organizers and exhibition center operators, as well as the major national and international exhibition associations, and selected partners of the exhibition industry. UFI’s main goal is to represent, promote and support the business interests of its members and the exhibition industry. UFI directly represents around 50,000 exhibition industry employees globally, and also works closely with its 58 national and regional association members. More than 750 member organizations in 86 countries around the world are presently signed up as members. More than 950 international trade fairs proudly bear the UFI approved label, a quality guarantee for visitors and exhibitors alike. UFI members continue to provide the international business community with a unique marketing media aimed at developing outstanding face-to-face business opportunities. For more info, visit www.ufi.org/research.