Editor’s Note: In the November issue, Exhibit City News will feature first-person perspectives from the event director and a first-time participant from the Randy Smith Memorial Golf Classic.

More than 250 participants soaked up the sun and fun in support of families within the industry who have suffered a personal tragedy or are experiencing serious financial hardship. The RSMGC is the tradeshow industry’s single largest charitable event.

Jim Clark, 3D Exhibits
Jim was a loving father, husband and loyal friend. Jim spent 25 years in the industry, the majority was spent with Exhibit Concepts in Dayton, OH and 3D Exhibits in Chicago. Jim attended many RSMGC events in the past. He passed away on October 19, 2009, and leaves behind his wife, Amy, and three young children; Lauren, Alex and Reese.

Julia Bunge, wife of Les Bunge of Laser Exhibitor Service
Julia Bunge, along with her husband Les, founded Laser Exhibitor Service in 1991. She was the original office manager, CEO and treasurer. Julia was instrumental in the owner/operator concept that the company adopted. She always believed a company should give back to those that are responsible for the company’s success. She also believes in giving back to the community.
In April of 2009, Julia was diagnosed with stage four colon cancer.

Will Cottrell, Czarnowski
Will was the Orlando I&D Manager for Czarnowski for the past 15 years. He started his career in the tradeshow industry nearly 28 years ago in Maryland. His wife, Tara, also works for Czarnowski. Will was taken to the emergency room and admitted into the hospital on July 19, 2010. After a series of tests, he was diagnosed with stage four lung cancer. At the age of 45, Will passed away on August 29, 2010, leaving behind his wife, Tara, his son Stevie, and his daughter Melissa. 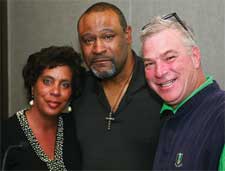 Melih Kutsal, Shepard Exposition Services
Melih Kutsal was a 22-year veteran with Shepard and the tradeshow industry. Originally from Turkey, Melih embraced our industry with a quiet, strong demeanor and a dedication to serving customers. In October of 2009, Melih was forced to the doctor. After a series of tests, it was determined that Melih had stage four lung cancer. He passed away on July 12, 2010 and leaves behind two young sons, Kamir Melih and Kameron.

Mel Stelmack, Renaissance Management
Mel has been a loyal employee of Renaissance Management for more than 20 years. He started with the company when it first began in 1989. In October of 2009, Mel was diagnosed with liver cancer. On June 20, 2010, Mel received a transplant and is now in the process of recovering from the surgery.

Joe Williams, National Black MBA Association
From 1986-99, Joe worked in sales at Freeman and rose to the position of national sales manager. Upon his departure from Freeman, Joe moved to show management with the National Black MBA Association. He served as director of conferences, meetings and events. In May 2010, Joe suffered a massive stroke and was diagnosed with congestive heart failure. He initially lost the use of his left side, but through therapy and rehabilitation, he is regaining the use of his left arm and hand. He even surprised brain surgery specialists by regaining his ability to walk, see and speak within 10 days of this stroke.

Daniel Earls, husband of Tenisha Earls of GES
Tenisha Earls has worked as an exhibit services coordinator at GES for 2 years, and her husband, Daniel, also worked in the convention industry on the Teamster’s extra board in Las Vegas. On October 31, 2009, Daniel was shot and killed after returning home from a night to trick-or-treating with his kids. Tenisha and Daniel have seven children; five boys and two girls. They range in age from 16 years to five months.

The RSMGC is very thankful for the sponsors and participants who have allowed the event to help members of the tradeshow industry for the past 16 years.

“As always, we have sincere appreciation and gratitude to each and every one of you that have contributed in the past to the Randy Smith Memorial Golf Classic,” said Rich Johnson, event director. “Our event has sustained and survived through the years and in these current, tough economic times due solely to your past and continued support.”

The winning foursome for this year’s event came from Czarnowski, and included Jim Milanowski, John O’Shea, Mark Metzler and Shon Welsh. The team shot a winning score of 56 on the par 72 course. The 3D Exhibits team consisting of Bob Prihoda, Gene Faut, George Furman and Andy Mack finished second with a score of 59.

Jack Berenato was the big individual winner. Berenato sank a hole-in-one on the 160-yard, 14th hole with a six iron. For his efforts, Berenato won $20k toward the purchase of a Harley-Davidson motorcycle.