Atlanta’s Hospitality Hall of Fame To Induct 4 on Nov. 1 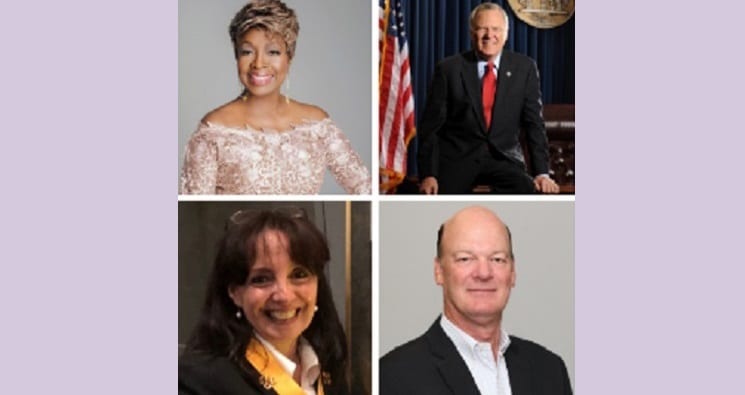 “We are very honored to welcome these individuals to the 2018 Atlanta Hospitality Hall of Fame class,” says William Pate, president and CEO, Atlanta Convention & Visitors Bureau. “Their contributions to Atlanta’s hospitality community have had a significant impact not only on our visitors, but also on those who call Atlanta home. We are delighted to honor their life’s work.”

Bertrand serves as executive producer and founder of BronzeLens Film Festival. Created in 2009, BronzeLens establishes Atlanta as a destination for film and production by people of color. She also worked at Atlanta Convention & Visitors Bureau for 32 years, serving as senior vice president of community and governmental affairs until 2015. During her time with ACVB, Bertrand created the Diversity in Hospitality Industry Summit, was recognized as one of Atlanta’s top hospitality industry leaders by the Atlanta Business Chronicle, was named to the Top 100 Black Women of Influence list by Atlanta Business League and was included on the list of Most Influential African-Americans in the Meetings and Tourism Industry by Black Meetings & Tourism magazine. Bertrand also founded Hospitality Industry Professionals, an organization dedicated to growth of diverse leadership within the hospitality industry through education, professional development, mentoring and networking.

Elected Georgia’s 82nd governor in 2010 and reelected in 2014, Gov. Deal successfully secured Georgia’s ranking as the number one state in which to do business for five consecutive years. Deal’s leadership on infrastructure, tax reform and workforce development initiatives contributed to the creation of more than 700,000 private sector jobs since 2011, set up $10 billion in transportation funding over the next 10 years and helped to make Georgia a top destination for worldwide industry leaders. Additionally, Georgia’s tourism demand grew 39 percent in 2017, the highest the state has seen in almost a decade. Last year alone, Georgia’s tourism industry generated $63.1 billion in economic impact and sustained more than 460,000 hospitality industry-related jobs across the state. During Deal’s time in office, Atlanta was selected to host the 2018 College Football Playoff National Championship, MLS All-Star Game, Super Bowl LIII, NCAA Men’s Final Four and many citywide conventions.

Mashburn serves as chief concierge for Atlanta Marriott Marquis beginning her career with Marriott brands in 1982 at Marriott Biscayne Bay in Miami as bell captain. Following a successful career in Miami, she relocated to Atlanta in 1987 and worked both the front and concierge desk at the Atlanta Marriott Marquis. During Atlanta’s time hosting the Centennial Olympic Games, Mashburn organized and staffed the International Olympic Committee desk as the Marriott Marquis hotel liaison and assisted international dignitaries, executive committee members and international press. She’s received the Where Magazine Silver Plume Susan Sturgis Hyde Distinguished Service Award for her ongoing contributions to tourism, the hospitality industry and the community at-large, while also being selected to join Les Clefs d’Or concierge society for her local expertise and commitment to excellence when assisting hotel guests. Additionally, Mashburn is involved with Concierge Society of Atlanta, Atlanta Community Food Bank and Project Open Hand.

Shanley retired as the senior vice president of National Foodservice Operations for Coca-Cola North America in 2018 after serving the company for 34 years. During his time with Coca-Cola, Shanley’s role included creating and articulating operational strategies and tactics and collaborating with bottlers, foodservice distributors and service providers to drive best-in-class customer value. He served as chair and executive committee member of the International Foodservices Manufacturers Association and was selected as the sixth person in the organization’s history to receive the Distinguished Foodservice Executive Award for his outstanding contributions to the industry. Additionally, Shanley was honored with the Roger Milliken Career Achievement Award by GS1 U.S. as a champion for consumer transparency, food traceability and supply chain visibility. He served on the International Foodservice Distributor Association Supplier Advisory Council and as executive committee member and past chair of the Atlanta Convention & Visitors Bureau.

Presenting sponsors for the event are Delta Air Lines, Inc., the Coca-Cola Company and the Atlanta Business Chronicle. Individual tickets or tables are available for purchase by visiting www.atlanta.net/halloffame.