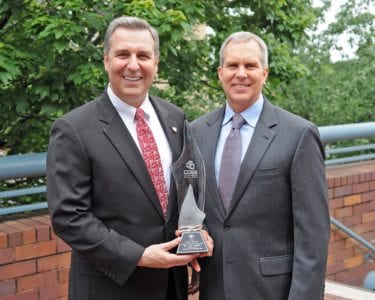 The Cobb Chamber of Commerce awarded Marietta, Ga.,-based Blue Sky Exhibits the prestigious 2017 Small Business of the Year Award at its First Monday Breakfast this week. The Cobb Chamber recognized 25 small businesses in the community, with Blue Sky Exhibits being distinguished among five finalists and awarded the highest honor. Blue Sky was also recognized as one of the Top 25 Award winners in 2007, 2008, 2009, 2010, 2013, 2015 and 2016.

Blue Sky Exhibits was co-founded by business partners Don Keller and Tim Kelley (pictured) in 2003 when they realized there was a need in the exhibit industry that wasn’t being met.

“After 9/11, the exhibit industry changed. Travel slowed down and it had a major impact on exhibit companies,” said Keller, owner/co-founder of Blue Sky Exhibits. “We realized there was a growing need in the industry for an exhibit company that brought true creativity, maximum value and deeper, longer lasting customer relationships. That was the inspiration behind Blue Sky Exhibits.”

More than 13 years after its founding, the company has become a thriving business with 29 full time employees and 92 clients across the United States. Blue Sky Exhibits has corporate offices in Marietta, Ga., with fabrication and warehousing in Atlanta with additional warehouses in Chicago, Las Vegas and Orlando. Their loyal customers include Amazon, Cartoon Network, Century 21, Delta Airlines, Fruit of the Loom, Merial, SanMar and many others. True to their values, some of their client relationships began before the inception of Blue Sky Exhibits.

“Don and Tim’s dedication to creativity, service and value truly set them apart,” said David Connell, president and CEO of the Cobb Chamber. “It is their commitment to forging personal relationships with businesses both small and large, as well as the time, energy and resources they dedicate to supporting our community’s charitable organizations that make them inspirational leaders and business owners; they are most deserving of this prestigious award.”

Blue Sky Exhibits consistently creates vivid, engaging environments that grab attention on the trade show floor. Their exhibits often win “Most Memorable” or “Best of Show” awards due to the company’s creative innovation, expert craftsmanship and perfectly executed tech components. Blue Sky Exhibits is committed to showcasing their clients with an unforgettable brand experience, face-to-face marketing and compelling strategies. Their trade show marketing services have yielded considerable results for each of their clients across a variety of industries.

“It is such an incredible honor to be recognized by the Cobb Chamber as the 2017 Small Business of the Year,” said Kelley, owner/co-founder of Blue Sky Exhibits. “As an entrepreneur, I am grateful that the Cobb Chamber has been there for Blue Sky at all stages of our growth over the past 13 years. We are incredibly honored and humbled to receive this award, and are thankful for the ongoing support of our phenomenal Blue Sky team, our families and our friends.” 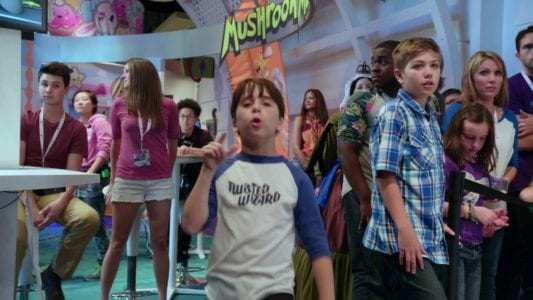 Late in 2016, Keller and Kelley were called upon to develop one of their biggest productions to date: an entire trade show set for Twentieth Century Fox. The staging had to be exciting, eye-catching, and engaging enough to appeal to a very particularly audience, because the project was the fourth installment of a beloved children’s series, Diary of a Wimpy Kid: the Long Haul.

In the recently released film, young Greg Heffley is on a family road trip to his Meemaw’s 90th birthday party, but he would much rather head off-course to “Player Expo,” a video game convention that features an appearance from his favorite internet celebrity. As kid goals go, this one was all about spectacle. Games, panels and life size characters, not to mention plenty of space for shenanigans. Luckily, Blue Sky Exhibits is no stranger to big undertakings. The results synthesize into an engaging, interactive and unforgettable environment. In the case of the partnership with Wimpy Kid, the company enhanced the energy and kineticism of the film’s climax.

“The film industry has brought a lot of work in a variety of industries to the Atlanta area, and when this opportunity came up, we were excited to be a part of it,” said Blue Sky Exhibits partner Don Keller. “It’s opening up new lines of revenue for existing businesses like ours. We are proud to show what Blue Sky Exhibits can do in a major production.”

Keller and Kelley are also partners at Basecamp ATL, a 70,000+ sq. ft. furnished movie and television production facility in Atlanta, which also participated in the production. Blue Sky Exhibits could not share details of their involvement until after the film’s May release, but they are pleased to be able to reveal their work now, especially on the heels of their latest honor. On June 2, the Cobb Chamber of Commerce awarded them 2017 Small Business of the Year. Find out more at www.basecampatl.com and check out Diary of a Wimpy Kid: the Long Haul in theatres near you.

Founded in 2003, Blue Sky Exhibits is a premier exhibit company dedicated to building and maximizing face-to-face marketing opportunities. We design, build, store and manage environments across a variety of industries, providing custom and portable exhibits for trade shows, corporate interiors and other settings. Our extensive experience, uncompromising customer service and dedication to producing creative, impactful exhibits enable our clients to “own the floor.” For more information, please visit www.blueskyexhibits.com.