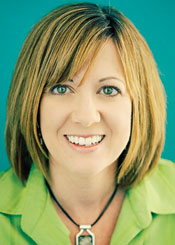 The trade show and exhibit industry may be a male-dominated one but that didn’t keep Shana Carr from fitting right in.

The division president of MC2 Exhibit’s southwest region for more than two years, Carr is a self-described sports nut who is used to being “one of the guys.”


“When I went to college, it was very heavily male-populated,” Carr said. “I grew up a tomboy myself, and I’m probably one of the boys more than one of the girls.”

As division president, Carr is responsible for the operations of MC2’s Las Vegas facility, the design sales office in San Francisco and the production facility in Kingman, Ariz.

Much of what she does on a day-to-day basis is sales-related, taking responsibility for the house accounts and working with sales executives on their accounts.

“A good portion of what I do is a pre-sales process, helping to prepare presentations, setting the strategy of how we’re going to approach client,” Carr explained.

Her job always starts with the client’s objectives. Then, based on those, they define what the clients’ needs are and what will appeal to their audience.

Carr got into the business 19 years ago as an architecture student in a Vermont college. During summers, she worked for general contractors as an estimator or project manager. Her school program was heavy on the engineering, which sent Carr in the direction that led her to the tradeshow industry. She relies on her education in her daily role, especially when taking a project from design to build.

“At the school I went to, there was a lot of engineering involved and that’s when I realized I enjoyed the technical side of architecture and how things were built,” Carr said.

Growing up on a dairy farm in Maine, Carr loved to draw and took art lessons from an early age. She had an active sports life, taking up field hockey and basketball in high school. She went on to play the shooting forward position on her college basketball team. Sports are something she enjoys doing with her husband and two sons, ages 5 and 9.

When she has time, that is.

Carr’s division does about 200 shows a year, which means she usually works a long work week, putting in about 50 hours when she’s in town. On the road, that number increases.

“It’s always something that I’ve done, so doesn’t bother me,” Carr said.

She can’t help but take her work home sometimes, as Eric, her husband of 10 years, also works for the company as a project manager on the environment side of MC2.

Whether at home or on the road, all those hours pay off as proven by the continued success of Carr’s division. Like everyone else, MC2 has experienced show shrinkage as businesses cut back on conventions and tradeshows to save money.
“Clients are approaching things a little smarter because they have to,” she said. “They’re attending shows and events that they have a reason to attend.”

Even though the Las Vegas industry may not return to the levels it reached before the recession started, Carr says she definitely expects an improvement, maybe as early as this year.