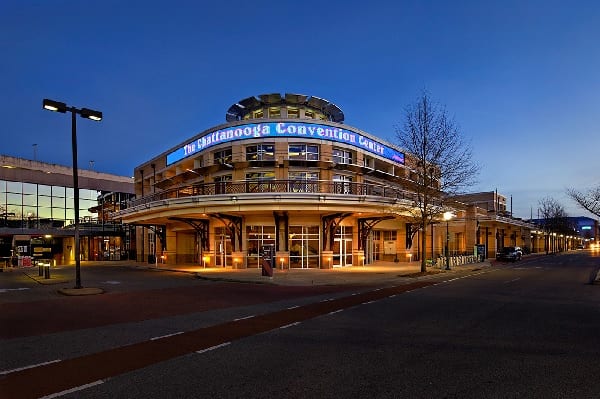 Wi-Fi: The CCC claims it has the “fastest internet in the western hemisphere.” Chattanooga became the first U.S. city to have a citywide gigabit network in 2010, earning it the nickname “Gig City.” The city-owned fiber internet reached 10 gigabit speeds in 2015.

Hotels: There are more than 2,500 hotel rooms in downtown Chattanooga.

Airport Info: 10.4 miles from the Chattanooga Airport, about an 18-minute drive

Fun Fact #2: In 2009 the CCC committed to an in-house, locally-sourced, customizable F&B offering for groups, and it was the first CC in the country to incorporate a farm-to-table program.

Fun Fact #3: The CCC is designed to use natural light throughout the exhibition area. The CCC is the nation’s first to incorporate “photovoltaic” lighting; this technology allows sunlight to filter in through 30-foot ceiling openings and complement the building’s artificial light. This lighting has proven “mood-enhancing” capabilities.