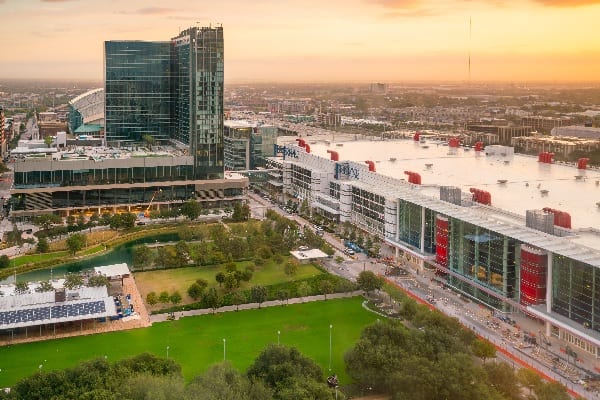 Houston is the fourth-most populous city in the country, its rapid growth fueled by its diverse economy. A city as racially and ethnically diverse, culturally rich and globally recognized as Houston deserves a convention center that welcomes and inspires visitors, and the George R. Brown Convention Center fulfills its role perfectly.

The GRBCC was named after George Rufus Brown, a civic leader, philanthropist and internationally recognized entrepreneur and engineer. After building the world’s largest construction company, Root & Brown, with his younger brother, Herman, the elder Brown brother and a group of investors founded the Texas Eastern Transmission Company, which donated six of the 11 blocks that comprise the GRBCC footprint.

The red, white and blue building—one of the largest convention centers in the country—is 100 feet tall and rises impressively from the Avenida de las Americas past the elevated Highway 59 where drivers can view it on their way to Houston’s medical and museum districts. Its facade is reminiscent of a ship, perhaps as a nod to Houston’s port, which ranks first in the U.S. in international waterborne tonnage handled.

After 30 months of construction undertaken by 1,200 people and a cost of $104.9 million, the GRBCC opened in 1987 and held its first convention in fall of that year for the American Society of Travel Agents. Construction began again in 2001 to expand the convention center, adding three exhibit halls and 62 meetings rooms, bringing the total to 105. Also. part of that expansion was the development of a 1,200-room headquarters hotel, the Hilton Americas-Houston, which is connected to the GRBCC via two skywalks. During its first renovation, the 1,150,000-square-foot convention center grew to 1,800,000 square feet. The expansion was completed on December 3, 2003, just in time to host Super Bowl XXXVIII press conferences.

In 2008, the 12-acre Discovery Green park was developed across the street from the GRBCC. The urban park contains a lake, performance areas, bandstands, a playground, two dog runs and plenty of space to lounge on the lawn. Two parking lots were built beneath Discovery Green to make up for the parking lots lost to this picturesque urban oasis.

Football is king in Texas, and in 2014, the GRBCC underwent a second major renovation in anticipation of Super Bowl LI. Six lanes the length of five city blocks were converted into Avenida Houston, a 97,000-square-foot pedestrian-friendly convention and entertainment campus that boasts five restaurants. A new hotel—the Marriott Marquis—also was built and connected to the convention center via skywalk. The hotel has 1,000 guest rooms and a pool deck with a lazy river in the shape of the great state of Texas. Construction was completed in 2016.

In addition to more than 100 meeting rooms, ballrooms and event space, the GRBCC includes a general assembly theater, which can seat 3,600 people for concerts, conferences, meetings and performances. Exhibit Hall B3 can be converted into an enormous 6,500-seat space that is an appropriate venue for sporting events and concerts.

Throughout the years, the GRBCC has been host to myriad impressive events, including two Texas Democratic National Conventions; the annual International Quilt Show, which draws 60,000 attendees; and Comicpalooza, Houston’s largest pop culture event. The GRBCC also opened its doors to its neighbors to the east, Louisiana, when the area was devastated by Hurricane Katrina. Approximately 7,000 evacuees took shelter in the massive space.

The GRBCC is owned by the city of Houston and operated by Houston First Corporation, a government corporation that, in addition to the convention center, manages several performing arts facilities, including the Wortham Theater Center, Jones Hall for the Performing Arts and Miller Outdoor Theatre.