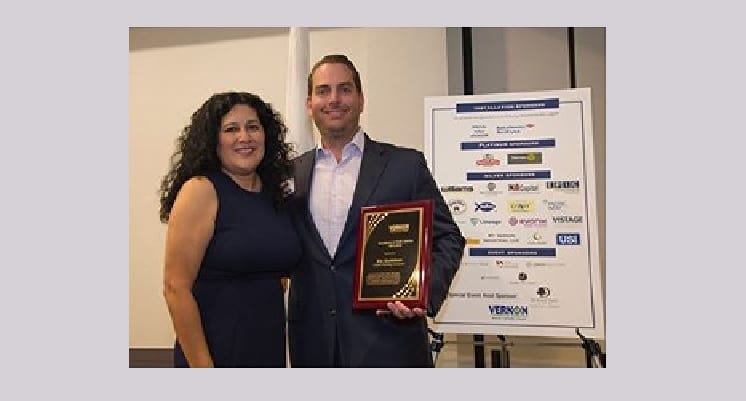 (Pictured above: Marisa Olguin, president and CEO of Vernon Chamber of Commerce presents the award to Coast CEO Eric Gustafson)

Eric R. Gustafson, CEO of Coast Packing Company and a past chairman of the board of the Vernon (Calif.) Chamber of Commerce, has received the Chamber’s Excellence in Public Service Award as well as a commendation from the Los Angeles County Board of Supervisors.

The Vernon Chamber praised Gustafson’s “tremendous dedication and leadership to serve on city commissions, achieving historic milestones for Vernon as a model city of healthy governance on behalf of its residents and business.” Coast is the number one supplier of animal fat shortenings in the western U.S.

At the same time, the Chamber of Commerce presented Gustafson with a commendation from the County of Los Angeles. Supervisor Hilda L. Solis served as the featured speaker at the Chamber’s 68th Annual Installation and Awards Luncheon, during which Gustafson was honored.  County supervisors lauded Gustafson for his “dedicated service to the affairs of the community and for the civic pride demonstrated by numerous contributions for the benefit of all the citizens of Los Angeles County.”

“As major stakeholders in the city where our family’s business started and has prospered over four generations, it was critical for us to be involved in civic activities,” Gustafson says. “Vernon remains one of the last manufacturing communities in the nation where the food industry will continue to thrive, thanks to its proximity to the ports, freeways and rail. Coast Packing’s decision to build better public-private partnerships with the city of Vernon and other regulatory agencies will continue to strengthen our community and help sustain our company’s economic position for the generation ahead.”

Gustafson served for seven years on both the city of Vernon’s Business & Industry Commission and the Housing Commission. He played a major role in helping the city to achieve historic milestones that transformed the governance practices for the community’s residential population, as well as preserving Vernon as a low-cost, attractive city in which to conduct business.

Gustafson joined the Vernon Chamber of Commerce’s board of directors in 2010 and was chairman of the board from 2012-2014. In that capacity, he played a critical role lobbying the state legislature on behalf of the Chamber and the “Save Vernon Jobs” coalition. Through his and the coalitions efforts, AB 46—a bill to disincorporate the city of Vernon—was defeated. In 2012, Gustafson was appointed to the Vernon Housing Commission and was named its first chairman.

Gustafson is the fourth generation in his family to own and operate Coast Packing. He is responsible for the company’s strategic direction and vision, and manages overall operations. Prior to being named CEO, he served as vice president of operations and has held various sales and marketing posts since December 2002. He has been a member of Coast’s board of directors since 2009.