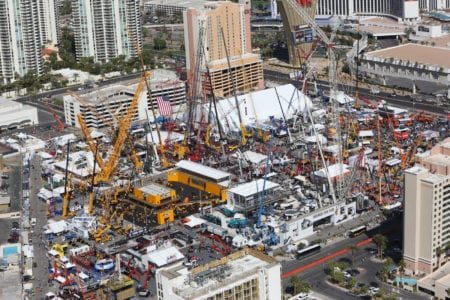 Though it already holds court as the largest trade show in the country, CONEXPO-CON/AGG widened its margin more this year, sprawling across a record 2.8 million square feet of exhibit space with 2,800 exhibitors. The event, which is held once every three years in conjunction with the International Fluid Power Exposition (IFPE), is an information epicenter for the construction, aggregates, and ready-mix concrete industries.

At the time of the last trade show in 2014, the construction industry was in the midst of recovering from what had been a brutal Recession period for the industry. But in 2017, organizers said, the industry was firmly back on its feet with 128,000 attendees from 150 countries, which was a 10 percent increase in attendance over 2014, and more buyers than the show has hosted in the past. “This has been one of the best editions of CONEXPO-CON/AGG – ever,” said Rich Goldsbury, 2017 CONEXPO-CON/AGG chair. “Exhibitors are writing sales at an incredible pace, and attendees clearly came to Las Vegas to buy.”

Organizers say that according to show metrics, nearly half of all attendees served in an executive capacity in their company and three out of five were in decision-making roles. “There was an element of confidence and pent-up demand at the show,” said Dave Foster, vice president for marketing & corporate communications at Volvo CE. “These are not tire-kickers. These are people who are willing to buy multiple machines for work they have now and anticipated growth based on a renewed confidence in the market.”

Officials say the show also sold 52,000 tickets for education sessions – the highest number in the show’s history. The next CONEXPO-CON/AGG is scheduled for March 2020 in Las Vegas.