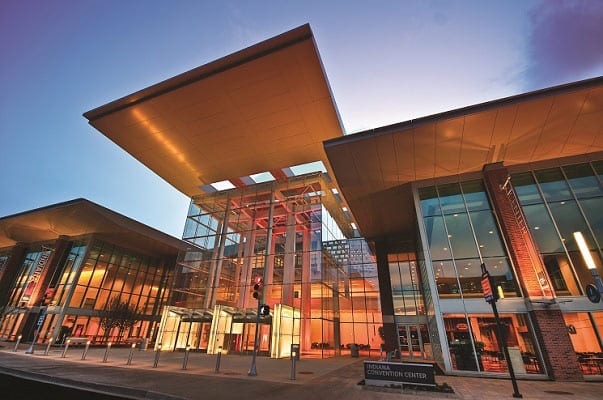 Indiana calls itself “Crossroads of America,” which was originally the nickname for the capitol, Indianapolis, which is the hub for several major interstate highways that criss-cross the state.

The Indiana Convention Center is right in the heart of Indianapolis, which would have probably pleased the no-nonsense founders of the city. The city was surveyed and designed as a 10 by 10 grid of city blocks in 1821. The convention center property occupies most of what was the southwest 12 blocks. The CC is just a couple blocks from Monument Circle, the large circular commons at the center of town.

The convention center is owned by the Indiana Stadium & Convention Building Authority Marion County Convention and Recreational Facilities Authority and it opened in 1972 as the Indiana Convention-Exposition Center. It has 71 meeting rooms, 11 exhibit halls, and three multi-purpose ballrooms. An underground tunnel connects Lucas Oil Stadium which has an additional 183,000 square feet of exhibit space and 12 meeting rooms.

The first major expansion was finished in 1984 at the same time as the Hoosier Dome, which later renamed the RCA Dome. The combined cost was approximately $94.7 million. Another expansion from 2008-2011 added the Lucas Oil Stadium a block south of the RCA Dome. A two-story convention center building replaced the dome and a tunnel now connects the stadium to the CC. The Indiana Convention Center currently has 49 loading docks, seven drive-in ramps and three food courts.

A system of skywalks connects the convention center to a dozen hotels with more than 4,700 rooms and many restaurants. Even when the temperature outside drops below 20 degrees, convention goers can get everywhere they need to go in climate-controlled comfort.

The CC is host to several unique annual conventions, including the Fire Department Instructors Conference International, The National Future Farmers of America Convention and The Big Ten Football Championship Game which has taken place there since 2011 to determine the conference’s season champion. The CC is also the home of Gen Con, the largest tabletop-game convention in North America. The event has been steadily growing for 51 years, with 61,424 attendees in 2018. The event has been held since 2003 at the ICC.

Wi-Fi:  Free Wi-Fi is available in the food courts for tasks that are not bandwidth intensive.

Hotels: Within a 1.5 mile radius of the ICC there are 27 hotels with 7,172 rooms. A skywalk connects 4,716 of those rooms to the CC allowing visitors to get around without facing the weather. There are 32,000 hotel rooms in Indianapolis.

Airport Info: The ICC is 14.4 miles from the Indianapolis Int’l Airport.

Fun Fact #1: When the Lucas Oil Stadium opened in 2008, the old inflatable RCA dome was airlifted away and deflated.