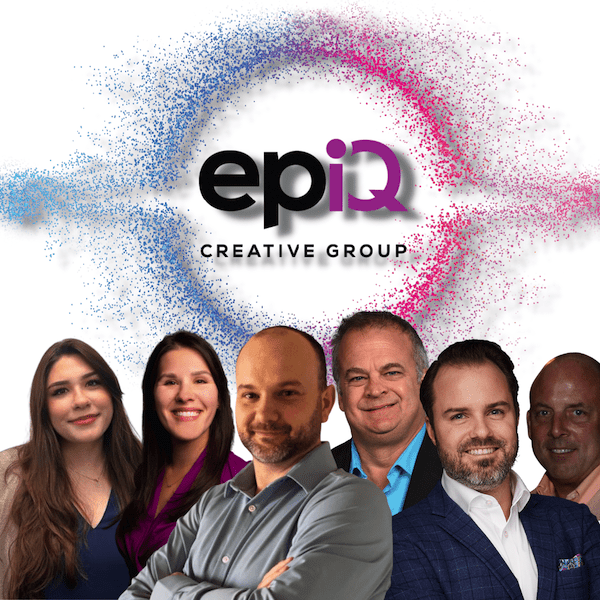 A Small Company with Big Plans and a Bigger Future

While many companies struggled to survive or even went under during the pandemic, a few rose to the occasion, adapted and thrived. EpIQ Creative is one of those few. This marketing business is just over two years old, but is already turning heads as an industry leader with enormous potential.

EpIQ Creative began its conception in February 2020, when marketing industry veteran Bill McGlade founded Victory Productions. In November 2021, he partnered with Scott Lebwohl to form epIQ Creative as co-owners. The rest is history—albeit short. Yes, it’s only been just over two years since the very first iteration of epIQ Creative, but the company’s ability to pivot, adapt and succeed—all in a global pandemic—is hard to ignore.

The company’s growth is starting to show in the staff numbers as well. “We have grown from a staff of two to eight,” Bill proudly says. “And in the next couple months will have small brands under epIQ and grow up to 15 employees in the next six months.” That’s fast growth, especially in this economy. So what exactly is it that set epIQ apart?

Scott and Bill could easily qualify as a dream team of the marketing world, with their sights set to not only make sales but to stay ahead of industry trends. When discussing marketing events or goals with clients, Bill says he tries to make clear to them: “The value of your organization isn’t just those three to five days. It’s 365 days.” And what exactly does he mean when he says that? You might be marketing for a specific event or promotion, but once that event or sale is over, is your business also done? No. That’s where epIQ Creative sets itself apart; their campaigns don’t stop working for you, even when the job is done.

EpIQ Creative has an impressive formula for success, which they call their marketing engine. This is a system designed by epIQ to create a marketing strategy plan from beginning to end, with “different value propositions for everybody at different times of the year,” Bill explains. “The epIQ engine generates leads and produces content to drive demand. The system we put into action to generate new revenue.”

Beyond the marketing engine, the epIQ Creative philosophy is simple: “Never start marketing,” Bill says. “You should always be marketing.”

So beyond growing the staff size, what else is on deck for the future of this ambitious company? “We’re going to rapidly expand into the community space and metaverse space,” Bill says. “The future of epIQ Creative is going to be constantly evolving into the best forms of marketing and generating the actual revenue companies make.”

Because the staff size will be growing quickly in the next six months, Bill likes to consider why people want to work for him and Scott at epIQ Creative, and why they’d stick around for a long time. He says, “epIQ Creative is a division of a larger company so we can offer incredible benefits. And everything is about being as transparent as possible from day one on the first zoom interview.” Furthermore, the epIQ Creative management team understands that diverse perspectives and backgrounds make companies stronger. “No matter what, your voice will be heard,” Bill says. He and Scott strive to make the workplace comfortable as a creative space so that the entire staff can present their ideas and concerns without hesitation. Bill says, “We thrive on making sure people walk up to me and come to me with a solution instead of just a problem. Plus—we’re dog friendly!” That never hurts!

Bill and Scott have plenty of experience and an industry leading philosophy, but there is one thing Bill is most proud of when it came to epIQ Creative. He smiles and says, “We’ve grown and now we’re in the process of making some big growth opportunities that will really shape the direction in which the company is moving forward. I’m most excited for that direction because it’s all kind of falling into place from our master plan, faster than we actually thought.” Bill adds how proud he was of his staff, who he can already see growing, contributing, and being valuable members of the team.

The future is bright for this innovative, creative and supportive marketing company with so much to be proud of and so much to look forward to.