Two medical shows scheduled for August recently canceled their meetings.  On July 27, AORN called off their live 2021 show, which was scheduled to open at the OCCC August 7. One day later, MHSRS scratched their August 23-26 meeting at the Gaylord Perry. Both decisions were based on the dramatic surge of COVID cases in Florida.

Headline news influences perceptions and determines decisions. But the reality is in the data.  While COVID tests, new cases and hospitalizations have increased dramatically in Florida in the month of July, the number of COVID deaths has NOT increased at the same rate.

Deaths lag hospitalizations by a number of weeks, and the total number of COVID deaths in Florida may increase. Nevertheless, while the Delta variant is more contagious than previous ones (and may result in a greater number of positive tests and even hospitalizations), the total number of deaths in the U.S. will be lower than in past surges for several reasons: First, the potential “sick pool” number is lower because almost 200 million Americans have either been vaccinated or contracted COVID; second, less than one-tenth of 1 percent of vaccinated people are testing positive for the virus (and even when positive, the symptoms are typically less severe); third, more young people are getting the virus, and younger people are not dying at the same rate as the elderly were last year.

Since the number of daily deaths can fluctuate wildly, a better way to gauge the severity of the disease to look at a seven day rolling average. The highest average this year was 185 on January 28—compare that number with the highest seven day average in July of 51.

One more example to keep things in perspective: There was a well-publicized COVID outbreak in the seaside community of Provincetown, Mass., over the July 4 weekend. The CDC reported a high percentage of vaccinated people receiving positive tests, and recommended a change in mask guidelines. By the end of the month, it did not appear as severe as first reported. Below is a Yahoo News photo from July 29. 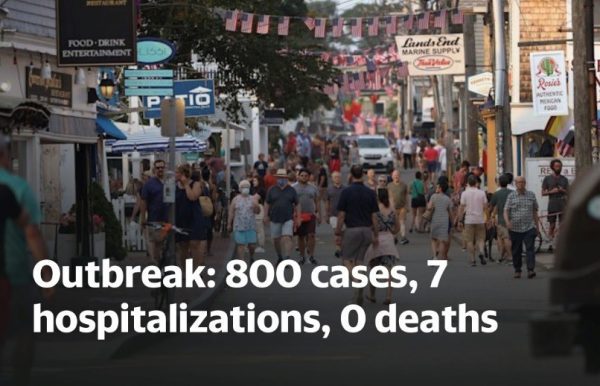 If I were to listen to the news on a daily basis, I might think the Delta variant is as devastating as the pandemic at its worst. It is not: it is more contagious, but it has not yet proved to be deadlier—not even in the state of Florida. It is not the end of the world.

In 1948, C.S. Lewis wrote an essay “On Living with the Atomic Bomb.” His point was, no matter what is happening in the world, we all still must live. We cannot cower in fear of what might happen. An excerpt of his article is quoted below. As you read it, substitute the word “COVID” for “atomic.”

In other words, do not let us begin by exaggerating the novelty of our situation … If we are all going to be destroyed by an atomic bomb, let that bomb when it comes find us doing sensible and human thing—praying, working, teaching, reading, listening to music, bathing the children, playing tennis, chatting to our friends over a pint and a game of darts—not huddled together like frightened sheep and thinking about bombs.”

As mentioned above, it is critically important to keep things in perspective: while the number of pandemic deaths is way too many, it is actually a very small number compared with the total population.  The number of COVID deaths in the U.S. is less than two people per every 1,000 people.  Pretty serious if I am one of the two (or if they are my family or someone I know) but not so serious if I am one of the other 998 people.  The average number of deaths in the state of Florida is also less than two per 1,000.

It is time we all go about our lives. Sensibly and with care, of course … but not in constant fear. Tradeshows need not be mass gatherings like a sporting event or a beach party. They can be performed in a safe and healthy environment. Too many businesses have closed their doors for too many days since March 2020. It would be devastating to step backwards now.