Creating a “Best in Show” Experience 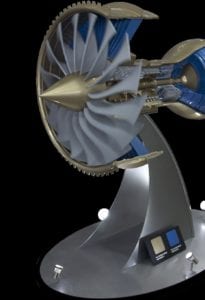 Creating innovative and exciting displays is a constant challenge for any event producer or marketing team. This was especially true for Precision Castparts Corporation.* They would be making their debut at the 2016 Berkshire Hathaway Annual Shareholder Meeting. It would also be the first time the meeting would be broadcast live. Nearly 38,000 stockholders and many more online viewers expected to view exhibits from over 100 of Berkshire Hathaway’s many subsidiaries.

PCC wanted to impress not only shareholders, but to amaze online viewers as well.

PCC challenged PacMin Studio to deliver an unforgettable experience… one that needed to be created within an aggressive time frame of less than four months.

They envisioned two large cutaway models paired with a striking CGI video–all to be ready to debut in late April 2016.

Precision Castparts Corp. fabricates numerous metal components and structures for the aerospace industry and other markets. Since their product offerings are extremely diverse, they would need to rely on highly detailed and accurate displays to convey their message.

Depending on the size and complexity of the part, the team used a combination of CNC machining and 3D printing to produce each individual part of the cutaway. Extremely detailed and complex parts, such as the components inside the engine shaft, were 3D printed and then hand finished.

Over 125 individual parts were grown or machined for both cutaway models.

The PacMin team also custom designed a lit steel base for each cutaway model. Miniature spotlights on the base could be positioned to draw attention without overpowering the models.

For the finishing touch, PacMin Studio partner BlueSky CGI produced a digital “fly through” video to complement the two models. The video seamlessly tied together all components of the booth.

The unique combination of tactile three-dimensional models with photorealistic videos allowed stakeholders to better understand the breadth of PCC’s capabilities.

PCC made their debut at the annual Berkshire Hathaway Shareholder Meeting and received an overwhelmingly positive reception. Their booth was also named Best in Show!

PacMin and PacMin Studio have built “WOW” experiences for their customers for more than seventy years.

* PCC was acquired by Berkshire Hathaway in January 2016 and made their debut at the 2016 Annual Shareholder Meeting held April 3 in Omaha, Nebraska. Their booth was also voted “Best in Show.”