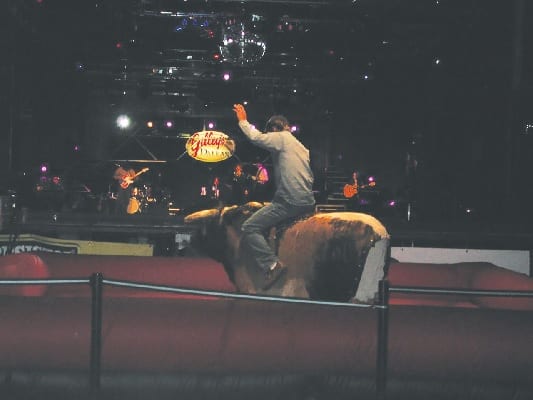 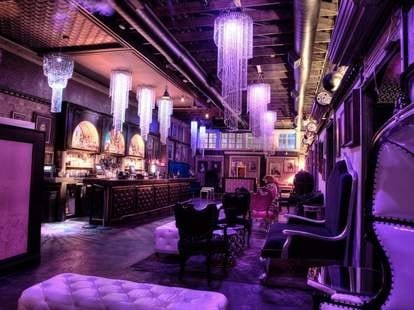 The deep end of Elm Street (Deep Ellum) is the live music epicenter of Dallas. There’s a candy store in Deep Ellum, where if you provide the right password, a man will open a hidden door to Truth & Alibi (pictured right), a speakeasy with a chic vibe. Just around the corner is a real, in-use barber shop with a hidden door in the back that leads to High & Tight, another low-lit speakeasy bar that often has live bands. 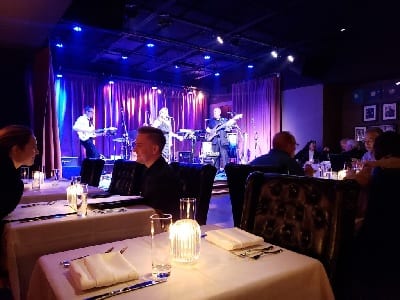 Another elegant throwback in Dallas is The Clover Club (pictured left), a swanky, 1960s-style supper club that offers dinner with a side of live music and dancing. Owner Eddie Campbell, who also owns neighboring Uptown bars Parliament and The Standard Pour, offers cocktails with a view in CC’s casual rooftop lounge with cabana-style seating and bright red sofas and umbrellas, along with a more elegant (no shorts policy) atmosphere in the main dining room. Expect to swing to Big Band tunes and Motown while dining on everything from lobster pot stickers to grilled quail and ribeye steaks. Reservations for tables to view the show require the purchase of an entree, though guests can also enjoy the entertainment from the bar at Dallas’ premier supper club and live music venue.

If a rooftop bar is more your style, the Gallery Rooftop Lounge comes with an infinity pool, a fire pit and awesome city views. High atop the artsy Canvas Hotel in the Cedars neighborhood downtown, it serves up creative cocktails, margarita flights, wine and craft beer alongside charcuterie boards, tuna poke tostadas and wagyu beef sliders.

Also in the Cedars neighborhood, there’s a new Gilley’s complex with nine venues with capacities ranging from 350 to 4,000, including the South Side Ballroom, South Side Music Hall, the Loft, Bonnie & Clyde’s, the Lone Star Room, the Brazos Room, the Saloon, the Pasadena Room, and the Federal Reserve Room. The original Gilley’s, a classic honkytonk club owned by country singer Mickey Gilley, opened in 1971 and reached fame when it was prominently featured in the 1980 movie Urban Cowboy starring John Travolta and Debra Winger. But, in 1990, a fire closed the original Gilley’s, and now it’s downright fancy in comparison.

For many, riding the mechanical bull at Gilley’s is a must-do while you’re in Texas. The original mechanical bull from the movie, El Toro, has three settings: Bubbles, Cupcake, or Whiplash. After you sign the release form, then head to the center of the inflated red padding and get a boost onto the bull with the instructions: “Squeeze tight with your legs, one hand in the air, and lean back when his front end tilts down.” With a jerk of your torso, you’ll be sent forward, backward, round and round. Be sure to hoot and holler like true rodeo pros. 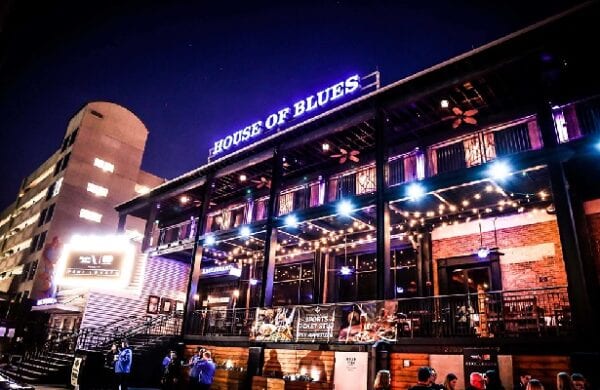 For jazz and blues music lovers, Sandaga 183, located just outside of Fair Park, is a paradise with nightly jam sessions, DJs and live music. The House of Blues Dallas, located in Victory Park, is one of the city’s premier venues for a wide variety of major musical acts. In fact, Billboard magazine rated the Dallas location as the fourth most popular music club in the country. Everyone from Alice Cooper to George Clinton have passed through its doors, and in addition to concerts, HOB also hosts free entertainment in the restaurant & bar.