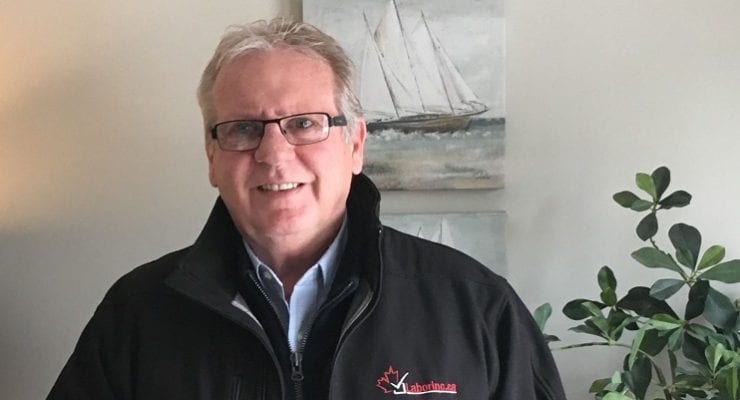 David Woods, business development director at Laborinc.ca, is celebrating 40 years in the exhibit industry and Brian Kearns, the president of Laborinc.ca, is proud of Woods’ long career and his association with Laborinc.ca. Woods first collaboration with Kearns was during the ‘90s at a company now known as TAG. Together they executed numerous projects on a global platform with one of the most challenging and rewarding being complete design, build and del

ivery of 400 exhibits for Canadian companies exhibiting in Mexico City for the launching of the NAFTA agreement partnership.

Having worked with some of the most prestigious exhibit houses in Canada, Woods was excited to reconnect with Kearns and join the team at Laborinc.ca. Says Laborinc.ca President Kearns, “It’s wonderful to work with David again and have his experience on board helping us build an exemplary company providing top tier I&D services to all our clients across Canada.”

Woods arrived in Canada in 1977 from the U.K. with a background in estimating and was classified as an architectural technologist by the local immigration office. It wasn’t long before he was hired by Disney Display out of Toronto with their other offices in Germany, Singapore and London. Woods soon mastered the Telex machine and was quoting on international projects around the globe. His position soon evolved into a site supervisor, project manager and assistant general manager.

Says Woods, “I have worked for a number of exhibit companies since 1977 but it was my first employer (Disney Display) and mentor Mr. Joe Batty who showed me integrity and honesty, and as I worked with them for ten years, I witnessed firsthand all the wonderful attributes of a family run business,” adding, “There were too many great times to mention, brilliant working colleagues and fantastic international clients. We built many museums and interpretive centers and three pavilions at Expo ‘86, traveled to supervise projects, throughout Europe, Asia, South America and the USA. The ten   years at Disney was the foundation for my career in the exhibition industry.”

For many years Woods worked overseas in China, Europe and South America and became quite a master of international pavilions, working with numerous export-minded governments including Britain, Germany, France, Italy, Canada and Australia, to name just a few. Many of these pavilions were constructed without aluminum extrusions. In the mid-1980s and ‘90s Woods was the project manager on many museums and interpretive center projects such as, Fort McMurray Oil Sands, the Kananaskis Interpretive Centre, the Banff Cave & Basin Hot Springs and the Canadian and British pavilions at Expo Vancouver.

Woods’ relates that “in the afternoon of August 16, 1977, while I was working in the music building at the CNE, installing the new Q107 radio booth, I noticed a very odd event; the RCA booth was being covered with black drape material and soon after we learned Elvis had died… it was a very sad day,” remembers Woods.

Another memorable experience was in July of 1995. Woods relates, “I was building the Canadian pavilion at the at the Javits for the Canadian government and we had about 70 exhibitors in our pavilion–we had three tractor trailers. But nobody could get in because all the labor was cancelled due to a corruption scandal. So, the 12 guys we ordered to work for us had to go register with the military (who had become the show contractors). Everyone was being identified and checked out to see if they were mobsters. Many of the contractors and politicians ended up in jailed due to the graft and corruption. The amount of military presence there was incredible – the crazy thing is, even the drayage went through the military.”

He remembers another time when he had a freight container offshore in Caracas and there was a strike at the dock. Says Woods, “We had the British Pavilion for the Caracas Oil Show and there was a strike at the dock and the ship couldn’t dock. Building a large pavilion for the British government, our president at the time, Joe Batty, owner of DISNEY Display, was in Australia. We notified him once we knew we couldn’t get the freight out. He basically pressed the proverbial panic button and instructed us to send men to Caracas with the construction plans and money to buy the materials there and build the pavilion from scratch. The men flew down and built it from scratch–they had to change some of the colors–but it got built and it opened on time. Our president flew from Australia to Caracas for the opening day and opened the British Pavilion at the Caracas Oil Show with the Duke of Kent. He did so many pavilions for the British government all over the world that he got honored with an OBE. We ended up being the vendor of choice for many years – especially since we didn’t charge the government for flying the men in and building it from scratch. It was just another challenge.”

Woods adds, “Mr. Batty is still living and we talk two to three times a year–he’s in his mid-80s now. When he started the company in 1953, there were only two to three display companies in North America. Mr. Batty’s first name is Joseph and he was a carpenter who started his company in a stable—which he used to love to tell people. I started with Disney in January of 1977–that was my university–we called it the University of Disney. We used to travel and do pavilions all over the world – Beijing, Lima (Peru), Santiago (Chile), nearly every city in Germany (our factory was in Dusseldorf), I worked in Munich, Paris, Amsterdam but the center of the universe when it comes to exhibits is Germany – and it almost always has been. I learned a lot in Germany; I learned how to manage–scheduling manpower, trucking, electricians, carpenters – similar to the states but on a bigger scale. That was a learning curve where I learned what not to do. I have lots of good memories from doing the larger pavilions. I’ve learned a lot in America too—from the hard-fast union sense, I’ve learned to appreciate the unions and work with them.”

Woods enjoyed the traveling aspect of his career and says, “Beijing was a great experience for me–I visited the Great Wall and I went left–everyone always asks if you went left or right at the Great Wall–and it was a fantastic experience. I showed about 20 Chinese labor people how to put Octanorm together and the next day it went missing–I think they went and built houses with it. I had to go get security to finish the pavilion.”

When asked what he had learned over the years, Woods replied, “With the pressures of designing, building and the logistics of corporate exhibits I learned from my mentor in my early years to also “smell the roses” when you are in a new city away from home. Smelling the roses may be a cruise around the canals in Chicago, a museum visit or simply taking a tourist type of bus tour to learn more about the city. Those memories last forever and along the way you end up with a compendium of tales!”

Kearns speaks for all of us when he says, “Congrats, David and keep those stories coming!”