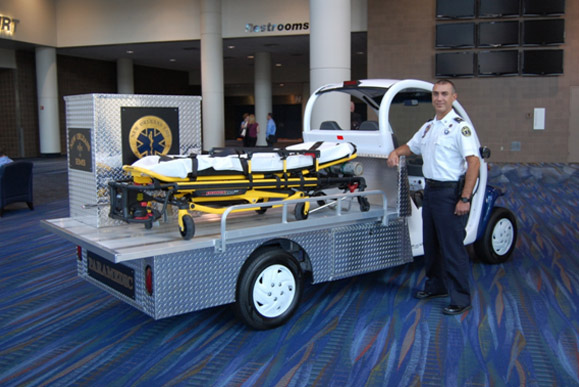 The convention center’s exclusive medical provider, New Orleans EMS, is the sole 911 provider of emergency medical services () in Orleans Parish. They will be able to quickly deploy the vehicle from three permanent medical stations located throughout the convention center and maneuver through the building in response to medical emergency calls. New Orleans EMS provides pre-hospital emergency care to convention attendees during shows as well as MCCNO employees and decorators operating within the building during move-in and move-out periods.

“Continuity of care is the most important part of a patient’s outcome,” said Allen Bellow, a New Orleans EMS paramedic who is stationed at the convention center. “The GEM will help us reach the patient faster and begin care.”

According to the Federal Emergency Management Agency (FEMA), the grant “provides funding to increase the preparedness capabilities of jurisdictions responsible for the safety and security of communities.”

Three years ago, Joseph Hebert, MCCNO public safety director, worked with the New Orleans Department of Homeland Security as they began the process of evaluating the grant request.

“A Threat Risk Assessment and a Vulnerabilities Study were conducted by the Federal Bureau of Investigation, the New Orleans Fire Department and the New Orleans Police Department through the and New Orleans Homeland Security Offices,” said Hebert. “The Convention Center, being the State’s largest asset, was deemed as Protected Critical Infrastructure. Because of the high-profile events the Convention Center hosts, with more than 600,000 people passing through the doors each year, additional security equipment was awarded through the grant.”