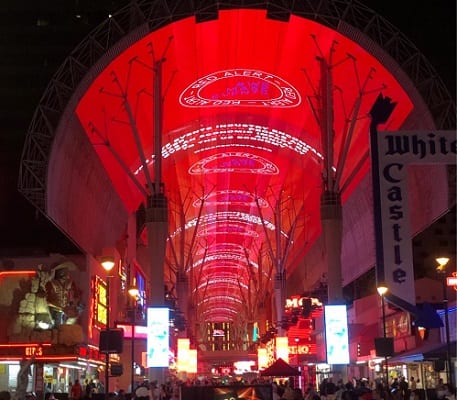 The coast-to-coast “Red Alert” campaign saw more than 1,500 buildings across the U.S. lit up in red last night, as the live entertainment industry organized a one-night, nationwide call to action on Sept. 1. In more than 50 other cities in the U.S., prominent buildings and skylines were lit up in red from 9 p.m. to midnight.

The community of live event professionals—actors, musicians, event planners, caterers, and producers—were raising awareness for industry workers left jobless because of the pandemic and imploring Congress to offer economic relief to the live events industry. The event was to highlight the fact that the PPP assistance is about to end and unlike other highly impacted industries, events are at near zero revenue.

“The live events industry is on the brink of collapse. Without financial relief, many businesses stand to permanently close, and families risk bankruptcy and homelessness,” says Brad Nelms, director, WeMakeEvents North America. “We want to take this opportunity to show the world the scale of what it takes to make live entertainment events happen and demonstrate how much this crisis has affected our community. This is a human issue, not a political issue, and it requires immediate action.” (Pictured left: IATSE 720 members at the Smith Center in Las Vegas with the lighted sign “We Are Events”)

According to WeMakeEvents, an advocacy group for industry visibility:

The goal of the #RedAlertRESTART campaign is imploring the federal government to pass pending legislation for small businesses, known as the RESTART Act. Organizers also want pandemic unemployment assistance and federal pandemic employment compensation to be expanded or extended to ineligible workers, like independent contractors.