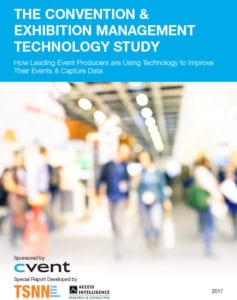 According to a research report completed through a collaboration of the Trade Show News Network and Cvent, show producers, managers, and organizers have a full appreciation for the capabilities of digital platforms in the execution and assessment of events, though they wish the technology was easier to use and had better data analysis.

The report, which is the third installment in a series of research projects undertaken by TSNN, is titled, “The Convention & Exhibition Management Technology Study – How Leading Event Producers are Using Technology to Improve Their Events & Capture Data.” Its aim, TSNN President and Editor-in-Chief Rachel Wimberly said, is to examine technology’s growing role in events and offer event professionals with tools to understand event technology, trends and best practices for using tech to increase the value and efficiency of their shows.

Researchers found that respondents felt it was most important to use event data to make better event management decisions and to improve attendance marketing and communications, as well as for capturing more attendee data. In terms of specific plans for technology, the report indicates that event managers plan to use technology to improve attendance marketing and communications as their primary goal. Exhibitor marketing and management and data analytics were also cited among the goals of organizers, though they trailed the first goal significantly.

But researchers noted that there is a wide chasm in the language used by organizers to identify what, specifically, they mean with the term technology. Nearly 20 percent say it represents apps, 11 percent say it means event management software, 10 percent think it refers to audience engagement, and so on. There are more than a dozen different definitions listed for the term event technology.

The entire report is available for free at Cvent.com.