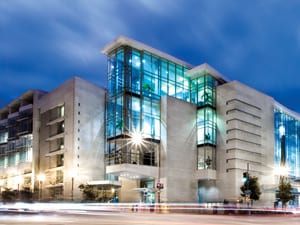 Mayor Muriel Bowser and Ward 2 Councilmember Jack Evans joined Events DC, the convention and sports authority for the District, to announce the newest retail tenants at the Walter E. Washington Convention Center (pictured right). The newest tenants include Morris American Bar and Unconventional Diner, who join Union Kitchen Grocery and Urban Athletic Club, who opened over the summer.  The tenants will continue to transform the surrounding Shaw neighborhood, as well as provide an enhanced experienced for the attraction of future conventions and their attendees.

“This new retail is one more way we are realizing the potential and raising the profile of the convention center and the surrounding neighborhoods,” said Mayor Muriel Bowser. “By continuing to fill these storefronts, we are driving economic activity, creating jobs, and finding new ways spread prosperity.”

The arrival of these new establishments will highlight and celebrate the District’s vibrant tourism and economic development, while also bringing highly anticipated economic activity and jobs to Washington, D.C., and more community services to the Shaw Corridor.

“On behalf of Events DC, we are thrilled to fully activate the Walter E. Washington Convention Center’s retail spaces to serve not only convention business but to help fill a void within the historic Shaw neighborhood.  The economic growth and retail development has turned the convention center corridor into a new ‘convention and entertainment destination’ within the District – and we’re actively remaining a part of its evolution,” said Max Brown, chairman of the board of directors at Events DC.  “The exterior streetscape strategy is the next phase for us to transform and enrich the façade of the convention center and create enhanced experiences for our residents and visitors alike.”

“As Washington, D.C., continues to grow and attract even more events, visitors and residents to the city, it is Events DC’s goal to continue enhance and enrich experiences, as well as remain an innovative industry leader, setting our destination apart from other markets,” said Gregory A. O’Dell, president and chief executive officer of Events DC. “Reactivating the Walter E. Washington Convention Center’s exterior is a prime example of the power of thriving neighborhoods propelling the betterment and growth of a city.”

“Morris American Bar is my first standalone project, where I’ve been able to oversee everything from the menu, service, and decor from the get-go, and I couldn’t be more excited to be in the heart of Shaw alongside some great neighbors,” says David Strauss, head bartender. “With the opening of Morris, we hope to offer the neighborhood a special place to gather and enjoy fine cocktails, leveraging the unequivocally distinctive techniques I learned under Sasha Petraske.”

Eric Eden, owner of Unconventional Diner, explains, “As longtime residents of D.C. and owners of several local businesses, my partners and I are thrilled to be part of what is quickly becoming the culinary capital of D.C., within and around the convention center.  Under Chef David Deshaies’ watchful eye, we are striving to create a special neighborhood restaurant that helps to redefine modern comfort food.  Diners should expect carefully executed diner mainstays alongside re-imagined dishes we hope will become unconventional classics.” By filling 100 percent of the available space at the convention center’s street-facing retail establishments, Events DC demonstrates its dedication to the Shaw community, while contributing to the continued economic vitality of the District.  Collectively, the leases with these businesses represent a 10-year revenue of $7 million.

“Our grocery stores are a key part of our local ecosystem that exists to build and scale successful food businesses. We are proud to showcase and support the wonderful D.C. makers who make this city so vibrant and dynamic,” says Cullen Gilchrist, CEO and co-founder of Union Kitchen.

“Urban Athletic Club is excited to be part of the retail transformation happening here at the Walter E. Washington Convention Center.  UAC has been been fortunate to partner with the great people at Events DC, who were so helpful in working with us during our design and build-out phase. We are also fortunate to be located in the bustling Shaw neighborhood with so many other amazing businesses like Union Kitchen Grocery, The Unconventional Diner, and others.  We look forward to providing neighbors and convention center guests alike with our unique fitness and wellness programming and experience.  Urban Athletic Club combines both data-driven programming and high-quality coaching to provide our athletes the ability to reach their goals and track their progress. From our CrossFit program and personal training, to yoga and bodywork, Urban Athletic Club will unleash your inner athlete,” says Graham King, owner and founder, Urban Athletic Club.

In addition, Events DC’s long-term streetscape plans will reactivate the exterior perimeter of the 2.3 million square foot convention center and better connect the building to the surrounding Shaw neighborhood through lighting, signage, canopies and furniture.  The exterior streetscape plans are part of a longer strategy that will create authentic experiences both inside and outside the convention center.  The proposed plans will not only provide added-value to convention center clients and its attendees, but the project will also create a greater sense of place for the revitalized Shaw community.

Based on the timing of necessary regulatory approvals, construction for the streetscape plans are estimated to start in the spring of 2018 with a phased delivery from 2018-2021.

Events DC, the official convention and sports authority for the District of Columbia, deliver premier event services and flexible venues across the nation’s capital. Leveraging the power of a world-class destination and creating amazing attendee experiences, Events DC generates economic and community benefits through the attraction and promotion of business, athletic, entertainment and cultural activities. Events DC oversees the Walter E. Washington Convention Center, an anchor of the District’s hospitality and tourism economy that generates over $400 million annually in total economic impact, and the historic Carnegie Library at Mt. Vernon Square. Events DC manages the Stadium-Armory campus, which includes Robert F. Kennedy Memorial Stadium and surrounding Festival Grounds, the non-military functions of the DC Armory and Maloof Skate Park at RFK Stadium.  Events DC also built and now serves as landlord for Nationals Park, the first LEED-certified major professional sports stadium in the U.S. The most recent addition is Gateway DC, an innovative and versatile space featuring a covered and open-air pavilion in the center of a one-acre park, conveniently located in the Congress Heights neighborhood of Washington, D.C. For more info, visit www.eventsdc.com or on Facebook (Events DC), Twitter (@TheEventsDC) and Instagram (@EventsDC).