While companies don’t register to exhibit at EXHIBITORLIVE to showcase their hidden talents, imagine what it would be like if they did…

…A stage at Mandalay Bay in Las Vegas from March 1-5 becomes the center of an age-old contest featuring many competing within the same or different categories. As the participants’ online fan base grows, so do the crowds coming directly to see them. Thriving on this face-to-face interaction, these fans spread the word about these talented individuals and offer to buy what they promise to deliver. By the end of the stiff competition, judges declare the best of each category or the overall winner at a special ceremony. And of course, after this party, there’s another after party – and so on…

Oh, wait a minute! – Even with its rebranding, EXHIBITORLIVE along with its networking events and education sessions has always delivered these things to those working in the tradeshow industry.

The annual Exhibitor Media Group-owned and produced show doesn’t actually focus on the hidden talents of exhibitors, obviously. But many of the show’s exhibitors do have hidden talents that go far beyond their duties at their 9 to 5.

So for exhibit managers and event planners searching for various vendors, why not keep them in mind not only for their service offerings, but also because of the very cool things their employees are capable of too? 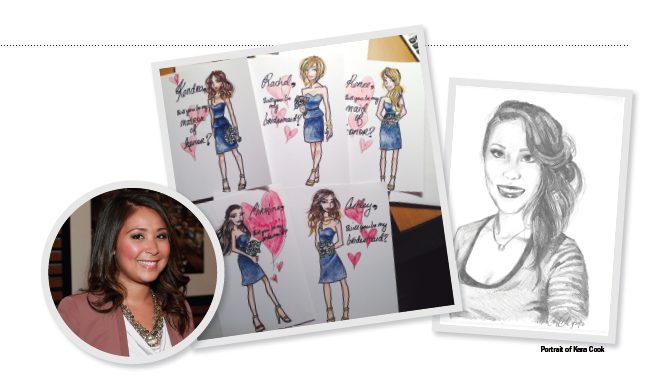 Caitlin Cook illustrated many of life’s special moments during her spare time away from her duties at Hargrove, a design and general contractor for events, tradeshows, and custom and rental exhibits.

Her fascination with the likes of “Sleeping Beauty” and “Snow White” drove her artistic endeavors from age 10. Cook’s skill level grew during private art lessons as well as during high school classes where she learned classic oil painting and pastel techniques.

Cook’s art most often manifests into birthday or congratulatory cards depicting caricatures of her friends and family. She also draws portraits, such as one to honor her sister who passed away. The time Cook takes to painstakingly illustrate a friend or relative allows her to show how much they mean to her. After getting engaged, Cook didn’t focus on herself; she sought to make her bridesmaids feel special.

“After I selected my five bridesmaids, I was brainstorming some ideas on how I was going to ask them. After scrolling through Pinterest and The Knot for hours, I was exhausted, and nothing was personal enough,” Cook reminisced. “I wanted to show each of them how much I value our friendship, and I thought that there was no better way than to draw something for them. Each card was drawn separately for each of the bridesmaids to express their individualities. Some people give gifts, others cakes and cookies, and I give drawings!”

Cook’s bridesmaids – Kendra, Rachel, Renee, Christine and Ashley – will no doubt cherish her illustrations as many have before.

“I am so touched when people keep the cards and illustrations that I have done for them – When people feel such a connection that they can’t bring themselves to throw away a drawing after years of having it!” Cook added. “After meeting up with a friend who I hadn’t seen in seven years, she showed me the drawings she saved and told me how much they meant to her.”

From junior high to college, art always played a major role in Cook’s life. As a middle school student, she developed a successful website that not only showed her creations, but it also earned her work on three custom illustrations. By the time she was in high school, Cook mostly illustrated for fun. This played a role, she said, in her decision to apply her skills in a business setting rather than go to college for art.

“Advertising seemed like the perfect fit, so I studied advertising at Penn State and interned at advertising agencies. After graduation, I worked for an event planning company in Baltimore before ending up at Hargrove. In all of my career endeavors, my background has been useful at some point or another,” she said.

As a sales executive for Hargrove, Cook said she finds her illustration skills very helpful. When a client describes their ideal exhibit to her, she can quickly draw a sketch to show them.

“Providing a visual is another way to ensure that the client’s message isn’t lost in verbal translation to a designer,” Cook explained.

Many in the tradeshow industry may not be surprised that Mark Holme is artistic. Not only did he win Designer of the Year at EDPA ACCESS in December 2014, but his day job is creative director for Hill & Partners – home since 1995 to branded environment specialists.

It’s what Holme chooses to do with his fine arts background outside the tradeshow industry that is pretty wild. Since childhood, Holme has depicted wildlife through paintings and drawings, but it is his Wild Wire sculptures that gained attention at two of his gallery showings.

“Last year, I challenged myself to creatively do something new with my artwork. I went to a gallery show with large animal sculptures made from found scrap metal and objects. I was excited to use metal as a medium to create wildlife. Wild Wire was then born to create wildlife from industrial wire capturing the essence of each animal,” he explained.

Holme’s journey into wire sculptures is so new that not too many people in the tradeshow industry know of his additional artistic capabilities. On the other hand, the art world is getting to know his work.

“Having a gallery show with my work was rewarding and a sense of accomplishment because the gallery owners saw a picture of my work and sought me out for their gallery show,” he said. “People’s response to my work has been amazing. They truly can’t understand how I did that in wire. I continue to be excited to create the next piece thinking of movement and what story to tell.”

After wire sculpting animals ranging from giraffes to peacocks in various sizes, Holme hopes to show more of his work at other galleries.

“It is very rewarding to see something you have worked [on] so hard gather a lot of interest in the marketplace. Having people willing to spend their money on something I created is a great barometer that you are doing something right. It is like they are adopting my piece; it is an extension of who I am,” he said.

Being an exhibit designer is also who Holme is, and he sees a lot of similarities between designing and creating fine art.

“As a designer and fine artist, you always think of composition, proportion, color, materials, execution and how best to tell a story. In a gallery show, you want to stand out from your competition much like clients at the tradeshow environment. Both things to me are connected with one helping the other,” he commented. 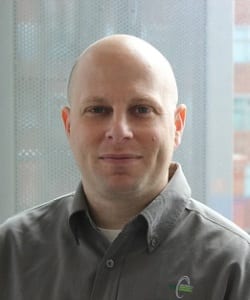 An avid hockey player since childhood, Justin Panzer has also coached the sport for 21 years, even seeing some of his former players make it to the National Hockey League (NHL).

“Many of the kids I coached have gone to play at a higher level. There are a couple of them in the NHL, a couple in the minor pro leagues, and lots of them in college and other school programs,” Panzer explained.

He currently coaches youth hockey in Columbia, Md. Additionally, every year for two weeks, he teaches kids to play at a youth hockey camp in Pennsylvania. This camp constantly attracts players from the NHL and its feeder leagues. All of these things reinforced that coaching hockey was one of the best ways for Panzer to spend his free time.

“I met someone volunteering with youth hockey clinics when I was in college. I did a few of those. I was hooked, and I began teaching kids how to skate. I often enjoy coaching more than playing,” he said.

His travels as a hockey player contributed to the creation of his event planning app, Eventuosity.

Panzer along with other players throughout the U.S. and Canada compete in “beer league” tournaments, a term for adult-level hockey since most teams are sponsored by bars. Each year, Panzer and his club travel to an outdoor hockey tournament in Eagle River, Wis.

As the person in the club with the most event planning experience, Panzer got tasked with organizing his team’s trips to the U.S. Pond Hockey Championships. This included coordinating who’d share hotel rooms and rental cars, which got pretty intricate considering most of the team flew to the tournament from different states.

In the beginning, Panzer managed the hockey event through spreadsheets, printed documents and hundreds of emails. Creating Eventuosity not only gave Panzer more time to enjoy his hobby, but he founded a company from it.

Taking photographs began as a way for Matthew Johnson to express himself. The landscapes he captures look professionally done, but Johnson only seeks to have fun. If his work looks professional to some, it’s probably because his lifelong passion for the activity drove his need to deliver the very best image.

“I have been interested in photography ever since childhood. It is only recently, the past few years or so that I have begun to get into the intricacies of photography. It is an art that I have longed enjoyed but am just really getting to understand. What can be created through a photograph is amazing to me,” Johnson said.

For close friends and family, Johnson could be talked into photographing weddings or taking portraits, but overall, he simply enjoys capturing a great landscape.

“I enjoy doing landscape and candid photography the most. I am still learning, so I get involved in shooting as much and as many different things as my schedule allows. It is all fun to me,” he commented.

Not one to promote himself, Johnson rarely mentions his photography skills. When those in the industry catch wind of it, they’re instantly intrigued.

“The biggest compliment I can receive is when people look at a photo I took and tell me ‘Wow, that is amazing!’ or ‘That is the perfect picture!’” Johnson stated.

In a few instances, Johnson’s love for photography coincided with his career at Hill & Partners.

“To shoot a great shot, you have to have a good eye for composition and a sense of how the scene is going to look. I’ve been able to document some of our projects through photographs that allow others, who were not physically present, to experience the environment,” he explained.

To meet these interesting individuals, try catching up with them at EXHIBITORLIVE!