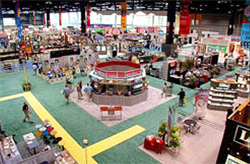 Proposals and counter proposals filled the air as the tradeshow industry in Chicago took center stage at the State Capitol in Springfield, Ill. Behind this flurry of activity and sudden concern was the abrupt announcement recently that two major trade shows would be leaving Chicago for other cities.


Mayor Richard M. Daley and other key legislative leaders responded to this crisis atmosphere by replacing the head of the Metropolitan Pier and Exposition Authority (MEPA), the administrative arm of McCormick Place. They also replaced the entire MPEA board with an interim board, which will give their specific recommendations on how to turn around the ailing trade show business in Chicago.

Complicating matters was the fact there were two competing legislative proposals at the same time, addressing the same issue. The first proposal backed by Daley and Illinois Gov. Pat Quinn would seek sweeping changes on how McCormick Place is operated, concentrating on drastic changes involving union workers.

The Quinn/Daley proposal would seek to amend the Illinois Labor Relations Act to make all tradeshow workers state employees. In addition, the MPEA would have the ability to hire, fire and determine all work rules. This legislation also would reduce the number of bargaining units from the current five, down to three and eliminate all current collective bargaining agreements negotiated between the unions and the contractors.

It would also prohibit the right to strike and give the MPEA the authority to audit all contracts and agreements. There are also many other issues related to bond financing and other items of interest, which are much less controversial and will not present much of a problem with passage. The other bill, which was supported by Illinois Speaker of the House Michael Madigan, was basically the same but removed the drastic changes to the labor agreements.

The unions representing workers at McCormick Place have stated publicly they vehemently oppose the Quinn/ Daley Bill and are officially neutral to the Madigan Bill. The reason unions oppose the Quinn/Daley Bill is they say it is an iron-fisted attack on workers and a smokescreen to hide the real problems of the industry, which they believe this bill doesn’t address.

“We’ve cut crew sizes, overtime and work rules,” said Dennis Gannon, president of the Chicago Federation of Labor. “We’ve done monumental things. We don’t believe anybody else has done as much as we have. Yet, we’re still the target. It’s not our fault the savings never got passed along.”

The unions countered these initiatives by submitting an Exhibitors’ Bill of Rights of their own. This proposal stated that exhibitors must have clearly delineated standards by which labor and management can work with the customer to maximize their satisfaction. As part of this Bill of Rights, unions want audits of charges and fees to determine whether savings are actually passed on to exhibitors.

Daley, supporter of the more drastic proposal, scoffed at the concept of an Exhibitors’ Bill of Rights.

“They can have a bill of rights all they want it’s all about costs,” Daley said. “What we’re asking for is how you lower costs. It’s as simple as that. Atlanta and Vegas and Orlando (are) doing a better job. We don’t want to lose shows.”

Unions contend their members’ wages are comparable to other cities and aren’t the reason for the higher costs. For example, the hourly rate charged to exhibitors in Chicago for a carpenter is $96.68. It’s $99.96 in Los Angeles and $148.89 in New York.

Furthermore they add, in Rosemont, Ill., one of the largest convention centers in the country, located right across the street from the Chicago city limits, the hourly rate charged for a Carpenter is $85 per hour, $11 per hour cheaper for the same union worker in Chicago.

In addition, in Rosemont exhibitors pay $55 per hour for drayage per hour but pay more than $80 per hour in Chicago, once again same union worker. This can be a major point of conflict since drayage can account for up 50 percent of an exhibitor’s show services bill, according to Michael Hughes, vice president of research and consulting for Trade Show Week.

Labor Unions aren’t the only ones opposing this bill. Show contractors Freeman and GES, in a rare show of unity for these fierce competitors, issued a joint statement: “Freeman and GES believe that fundamental labor reform in Chicago is necessary, and while we support the goals of the proposed legislation, we share the concern of many of our Chicago customers regarding the potential cost and customer service implications of this specific approach.”

The International Association of Exhibitions and Events released a statement also criticizing the legislative plan: “First and fundamentally, seeking legislative relief for marketplace issues always has the potential to be troubling. In fact, it is entirely possible that over time the inflexibility of an legislatively imposed solution will only serve to drive rates even higher and to do so with very little prospect for eventual relief.”

Unions also contend one of the reasons Chicago is losing ground to some of its competitors is the paltry budget Chicago allocates for bringing in shows. Chicago’s Convention and Tourism Bureau’s annual budget for 2010 is $13.7 million, down from $14.1 million last year. Orlando’s budget is $47.7 million and Las Vegas is $143 million. Las Vegas and Orlando hold the top two places on the list, but Chicago ranks 16th.

Legislative action on the bill containing the controversial labor changes could happen at any time, but most observers expect action will be taken in the legislative session in mid May.