The winner of the inaugural IAPCO Innovation Award was announced at the IMEX Gala Evening at Frankfurt Opera House in May. Andrew Dergousoff of ICS Canada earned this accolade.

The new award for PCOs attracted numerous applications, and the three short-listed nominees were presented by Council to the audience at IAPCO’s Annual Meeting in Lisbon earlier this year, for delegates to vote on the nominees’ innovative ideas, implementation, and successful contributions to their companies. 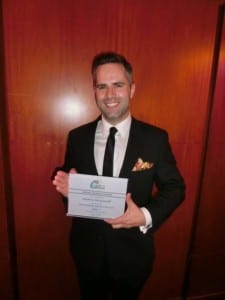 In addition to Dergousoff and his work on virtual meetings, the short-list included Magdalina Atannassova of AIM Group Bulgaria for work involving social media; and Dohyun Kim of MECI Korea, who worked on public relations strategies. All three candidates showed very high levels of understanding of the meetings business, along with a great capacity for integrating innovative solutions, but there could be only one winner.

“I could not be more delighted,” said an overjoyed Dergousoff. “It was a real honor just to be shortlisted, but to win…that was something I only dreamt of. It is a fantastic recognition.”

The IAPCO Innovation Award began last year following the deaths of the final two ‘Founding Fathers’ of IAPCO. To honor their legacy, IAPCO introduced this new award to recognize the innovative ways in which the younger generation of IAPCO members, aged 35 years or less, deal with the challenges faced by international PCOs.

“To celebrate the tremendous efforts of these four individuals [the Founding Fathers], we have created an award to commend the most creative and high-achieving young members of staff at IAPCO member companies,” said Michel Neijmann, president, IAPCO. “It is vital we encourage and reward those who are the future of the profession.”

IMEX also embraced the opportunity to support this initiative.

“We are delighted to support IAPCO in this way,” commented Carina Bauer of IMEX. “The advancement of youth, creativity and education are all elements of this industry with which we are happy to be involved. We wish the applicants good luck in this innovative challenge.”

Considering the innovations of this year’s entrants, it is clear to see that the future of PCOs is in good hands…which also means that the industry itself is a winner!