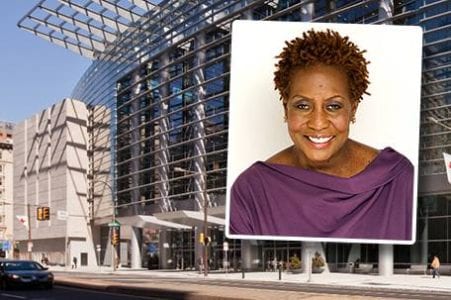 Several hundred friends of civic leader Ahmeenah Young, former President & CEO of the Pennsylvania Convention Center, attended a celebration of her life at the $1.3 billion facility she led. Young, a trailblazer in the Philadelphia hospitality and civic arenas, passed away on June 2 at the age of 69.

Former Pennsylvania Governor Ed Rendell led the tributes by civic, religious, and hospitality leaders as well as family and friends of Young.

”I remember Ahmeenah always had a twinkle in her eye. No matter what the circumstances, she always had an upbeat attitude and made me laugh,” said Rendell. “Ahmeenah always had great advice that was always spot on. Memories like those and all of the inspiration she manifested will never die.”

Young, Rendell and Meryl Levitz, president & CEO of Visit Philadelphia, were among the city leaders who helped to launch the Convention Center during 12 days of special events that coincided with the first Welcome America celebration in 1993. The tribute to Young, recognizing her more than 30 years of community service and advocacy on behalf of the hospitality industry, was scheduled to coincide with the opening day of events for this year’s annual Fourth of July celebration.

“My mother was a black woman who could rise. And once she reached a position of power, she used it to mentor the next generation. She wore her power with integrity and was always trying to help people,” said Pakeso Young, son of Ahmeenah. “She rarely spoke of her challenges but any challenge she had, she faced with grace and integrity. Anything positive I have done in my life, I have done because of her.”

Cherelle Parker, Jannie Blackwell, Mark Squilla, and Kenyatta Johnson of Philadelphia City Council, Kevin Johnson of OIC, Donna Cooper of Public Citizens for Children and Youth; and Kevin F. O’Toole of the Pennsylvania Gaming Control Board were among the civic leaders who participated in the tribute.

Young’s Convention Center colleagues were represented by Gregory Fox, Esq., chairman of the Convention Center Authority’s Board of Directors; board members Marian Tasco and Heather Steinmiller, Esq, who worked closely with Young; and John McNichol, president & CEO of the Center.  Former PCCA Board Chairman Thomas “Buck” Riley, Jr. and former Board Member Carl Singley, Esq. also were present. Young served in various positions at the Pennsylvania Convention Center Authority, including executive vice president and general manager, as well as executive vice president of external affairs. Young also worked in the private sector as an entrepreneur before she became the fifth president of the Center in September 2008, a capacity she served in through December 2013.

”I knew Ahmeenah for over 25 years and I knew her as a brilliant, eloquent, stylish diva who has a smile and a warmth that just embraced you,” said Carl Singley, former PCC board member and close personal friend of Young. “She will be remembered for her endless optimism, good will, and deep, unwavering faith in human kind. Ahmeenah was truly inclusive until the very end.”