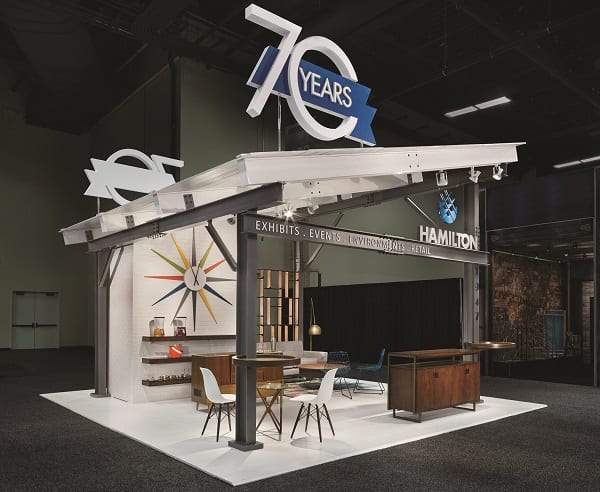 Hamilton Exhibits: A Family Company for More Than 70 Years

Once upon a time, there were five brothers Hamilton. Renzie Hamilton, an advertising professional by trade, had a vision for a new kind of marketing agency that would change the way companies used visual displays to tell their stories. He left his job in the advertising department at Citizens Gas of Indianapolis, took a two-story building in downtown Indianapolis and opened Hamilton Display Manufacturing Company in 1947. A year later, his brother Kenneth joined him, followed by brother Bill in 1954, while brothers Rich and Bobby chose other professional paths.

By 1960, the growing company changed its name to Hamilton Displays, Inc., and was widely known as the “King of Floats” for building most of the floats for the Indianapolis 500 Festival Parade. Among Hamilton’s most outstanding floats were the “Princess Float” that won top honors at the 1964 Indy 500 Festival Parade and the Indiana University Big Ten float for the 1968 Tournament of Roses Parade. The demand for Hamilton’s creative masterpieces prompted its move to a larger facility, the former Indianapolis National Guard Armory, in 1969.

Hamilton built its first tradeshow displays for such notable companies as Citizens Gas, Stewart-Warner, Pittman-Moore, Indiana Bell Telephone, Diamond Chain and Wheelhorse, and as Hamilton’s fame grew, Renzie was asked to design the stage sets, showroom and table decor for the 1976 USO benefit at the Indiana Convention Center. Bob Hope was the guest of honor that year, and the event was made more special by the fact that he was also celebrating his birthday.

While tradeshow exhibits have always been a central area of expertise for Hamilton, the company has operated many specialized divisions over the years, including airport advertising; retail fixtures and interiors; and graphic design and production.
Fast-forward to 1990, when Dan Cantor and Joel Coleman purchased Hamilton from Kenneth, merging Hamilton with its greatest local competitor, Dimensional Designs. A new era began with a 200,000-sq.ft. facility in Indianapolis’ East Side, and full interest in the company was finally purchased by Dan and Katy Cantor in 1993. Dan is a lifetime entrepreneur with an MBA in finance from Indiana University who continues to bring energy and inspiration to the Hamilton brand as its CEO and to the industry at large as a leading voice of the Experiential Designers and Producers Association (EDPA).

In 1997, the company changed its name to Hamilton Exhibits and has continued as an industry pioneer in every aspect of exhibit solutions, including concept, design, fabrication, logistics and project management. While it has always maintained its headquarters in Indianapolis, it has operated sales offices, warehouses and production facilities in cities across the nation. In 2015, Hamilton opened its Chicago sales and design studio, and it is there that Jim Obermeyer, vice president, Hamilton Chicago, resides.

Obermeyer is an example of the caliber of talent and longevity that Hamilton attracts. With nearly 40 years of experience in the tradeshow industry, he first joined Hamilton in 1993. Today he is responsible for not only the Chicago office, but for sales, marketing and business development companywide.

When asked what key changes he has seen in Hamilton over the years, Obermeyer says, “Like our industry, a lot has changed in the last few decades, and a lot has stayed the same. While we spend a lot of time talking about ‘experiential’ now, and most of that has to do with new engagement and interactive technologies available, the reality is that tradeshows have always been about creating an experience for the audience. How we do it now may be new, but we have always done it! Only now, our company has event technology and engagement services teams in house, adding to the breadth of services we have always offered. With the addition of our Engagement Services team, we are now able to create not only the stunning architectural elements for the physical space, but also the deeply interactive experiences that will engage the audience in that space and provide the technology to make it all happen.”

In his view, Hamilton’s greatest contributions to the industry originate with its people. “While members of our leadership team have long been involved in a wide variety of ways with industry associations and organizations, it is the solid reputation and strong culture that are reflected in all our teams, from our on-site labor and show floor supervisors to our project managers and client team directors who create a positive experience for our clients and our supplier partners.”

Hamilton remains a family company after more than 70 years, and Obermeyer believes that family is at the core of Hamilton’s success. “We have stayed a family company and have maintained the culture of quality and service that was built by our founder Ken Hamilton and carried forward by our current owner, Dan Cantor. Almost 75 years with just two families has created the strength to overcome obstacles and create success for our clients.”

No company endures for the better part of a century without knowing how to adapt. According to COO Jason Weddle, Hamilton is

poised to both innovate and enthusiastically embrace whatever comes next in the world of face-to-face marketing, and he is bullish on the future of the industry. “Over the course of time, there have been a wide variety of threats to our industry (the dot.com bust, the invention of the internet, the Great Recession) that were supposed to end tradeshows. But tradeshows and events have continued to be a viable marketing opportunity, because being face-to-face with your clients and suppliers and partners is still one of the best ways to do business.”

Today, you have but to walk the floor of any major tradeshow to see examples of Hamilton’s stunning handiwork that engage consumers through sight, sound, touch, curiosity and imagination. What would Cantor most like for people to know about his company? He answers, “Bottom line is this: we create immersive brand experiences. We are an event marketing company. We create brand spaces, with a focus on tradeshows and events. And we always start with strategy and help our clients decide what success looks like, and then we create and execute a plan to bring it all to life. We create memorable experiences that deliver measurable results.”

Hamilton Exhibits creates immersive brand experiences. Through strategy, production and project management, their event marketing solutions will bring your brand to life. They partner with you to engage your customers through tradeshows, events and sales environments, making memorable experiences that deliver measurable results. For more info, visit www.hamilton-exhibits.com.