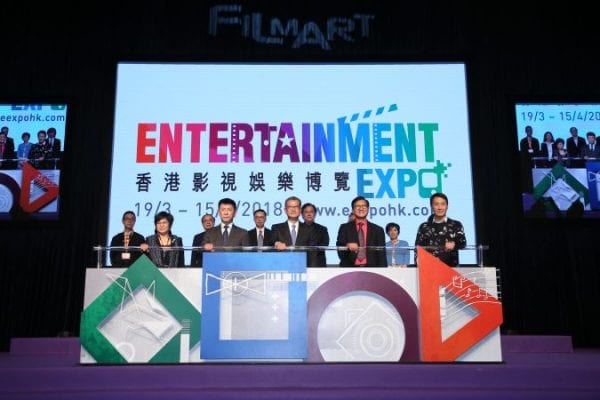 Organized by the Hong Kong Trade Development Council, the 22nd edition of the Hong Kong International Film and TV Market (FILMART) runs March 19-22 at the Hong Kong Convention and Exhibition Centre, raising the curtain for the largest marketplace of its kind in Asia.

FILMART, as a premier trading platform, is featuring some 850 exhibitors from 37 countries and regions, including emerging markets such as Colombia, Mongolia, Nigeria, and Ukraine. Exhibitors from across the world continue to set up pavilions at FILMART to promote their entertainment productions to global buyers, including the United States, Canada, Japan, Korea, India, Thailand, France, Germany and the United Kingdom.

This year’s FILMART sees record-high exhibitor participation from various Chinese mainland provinces and cities. In particular, exhibitors from Beijing, Fujian, Guangdong, Hangzhou, Hunan, Ningbo and Shanghai are setting up regional pavilions, encouraging global buyers to leverage the potential of the mainland’s film market. One of the thematic seminars held this morning featured a number of leading figures in the mainland TV sector, including studios, distributors; OTT platform and big data research company, and discussed the prospect, challenges and forecasted changes in the mainland market.

Two new themes are making their debut at the fairground to cater to the diverse needs of global industry players. The Doc World has more than 200 exhibitors to showcase their latest productions, while the Global Filming Support features 14 exhibitors from eight countries and regions, including the US, Finland, Spain and Taiwan, to highlight the business opportunities presented by various filming incentives.

With documentaries under the spotlight, Daniel Braun, co-president of Submarine Entertainment from the U.S., will join other global industry leaders to discuss viewers’ needs at the “Documentaries: From Local to Global” seminar.

In addition to the exhibition, FILMART also features a remarkable line-up of leading industry representatives from sectors including film, TV, digital entertainment and animation to share their insights. Speakers include Kang Hye Jung, producer of the Korean blockbuster The Battleship Island and CEO of Filmmakers R&K; David Kosse, executive producer of Academy Award-winning films,The Theory of Everything and Room; Andrew Hevia, co-producer of Moonlight, the Academy Award winner for Best Picture; and Juno Mak, renowned Hong Kong director whose work includes Sons of the Neon Night and Rigor Mortis.

At the “VR/AR: What Will This Change the Animation Industry” conference, speakers including Brandon Oldenburg, Academy Award winner for Best Short Film, Animated and Chief Creative Officer of Flight School Studio, will examine how VR is changing story-telling in animation along with other prominent speakers.

A wide range of networking activities, thematic seminars and press conferences will also be held at the four-day event to help open doors to more business opportunities, including 105 global and Asia premieres. A total of 25 award-winning titles will be featured at the market screenings.

Established in 1966, the Hong Kong Trade Development Council is a statutory body dedicated to creating opportunities for Hong Kong’s businesses. With more than 40 offices globally, including 13 on the Chinese mainland, the HKTDC promotes Hong Kong as a platform for doing business with China, Asia and the world. With 50 years of experience, the HKTDC organizes international exhibitions, conferences and business missions to provide companies, particularly SMEs, with business opportunities on the mainland and in international markets, while providing information via trade publications, research reports and digital channels including the media room. For more info, visit:www.hktdc.com/aboutus. For more info on FILMART, visit http://m.hktdc.com/fair/hkfilmart-en and for more info on the Entertainment Expo, visit  http://www.eexpohk.com.