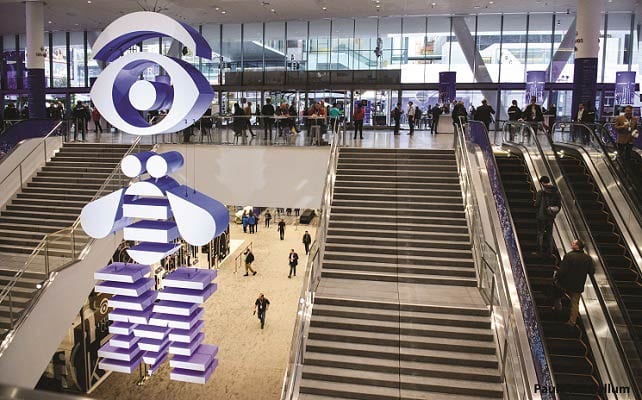 The IBM Think 2019 conference took over the streets of downtown San Francisco Feb. 12-15, closing Howard Street as an estimated 30,000 people made their way from home base at the newly expanded George Moscone Convention Center to 15 separate venues to hear experts talk about the latest innovations in business technology. More than 2,500 breakout sessions were held at locations including the W San Francisco, Hilton Union Square, InterContinental San Francisco, City View, Yerba Buena Center for the Arts and an AMC movie theater. 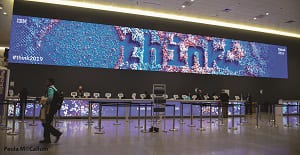 Typically, Willwork Global Event Services, would need an entire week to install a show of this magnitude, DaRosa says. For the IBM conference, he possessed the space on Saturday afternoon for a show that opened on Tuesday.

“It was a massive team effort from the local unions to the teams we brought in to pull it off,” DaRosa explains. “There were a lot of moving parts.” The unions worked around the clock on 12-hour shifts running about 400 men and women during the day and 350 on evening shifts, he says. Willwork Global Event Services sent specialized teams for payroll, administration, supervision, safety and management, all working 14 to 20 hours a day leading up to the opening of IBM Think 2019.

With such a tight move-in schedule, Willwork and the GPJ Live Production Team put together a logistics map to cycle 150 tractor-trailer loads of equipment and material into Moscone Convention Center, lining up trucks in the correct “batting order” to get the assets in place as needed at a specific time. “We were pushing them through as fast as we could,” says DaRosa. “As soon as we stopped unloading, the truck circled around to get the empty crates out for the next crew to do the aisle carpeting. It was a revolving door with freight in and freight out that never stopped.”

And this extensive event came less than six months after Willwork Global Event Services was challenged with preparing for and executing the city-wide OracleWorld event that welcomed 60,000 attendees from 175 countries to San Francisco…winning the general contractor contract for the first time only nine weeks out from the show opening.
Chris Goveia, vice president of the creative team for Auburn Hills, Mich.-based George P. Johnson, says one of the major considerations at IBM Think 2019 was the 48-hour window for GPJ to set up more than 500,000 square feet of exhibit space in Moscone Center’s North and South halls. It was essential that GPJ design the experiences and environments to enable success.

“From the outset of the planning process, our creative and operations teams collaborated to define a strategy for enablement,” Goveia say. “As IBM’s largest proprietary conference, Think needed to uphold and deliver on the brand attributes of premium quality, relevant content and meaningful experiences. With the challenges around set-up time, we needed to identify the essential elements and home in on how to craft and engineer those experiences to maximize efficiency without losing integrity, interest or brand recognition.”

George P. Johnson designed and fabricated most of the structures for the conference campuses, including theaters, think tanks and activations, which were all part of a branded architecture system developed with IBM and tied to the overall brand.

The theaters are large-format, fabricated architecture supporting materials and graphics that allow for custom visual identification within the conference. Think tanks are designed to support a variety of deep-dive breakout sessions and networking. They can be configured to support the best scenario for delivering content and engaging with the audience following keynote speeches in a theater-type setting.

Goveia worked with Matthew Calkins, design principal and creative director of IBM Events and Environments, to come up with special “brand moments” for attendees, especially those that created social media buzz by serving as a perfect photo opportunity.

Most notable was a 40-foot physical representation of the famous IBM rebus logo suspended in the renovated lobby of Moscone South. Originally designed by Paul Rand in 1981, the logo uses pictures of an eye, a bee and the iconic M in vertical order.

“Creating a three-dimensional, suspended version presented an entirely new set of challenges,” Goveia says. “To maintain the integrity of the logo, GPJ needed to come up with creative solutions and materials to solve for the ‘negative’ space between each of the letters and elements. Size and weight were also critical factors, as the structure had to be suspended over an area where attendees would be walking, and again, rigged and hung in what was an eerily short move-in time.”

Everyone at IBM and GPJ considered the show a “rousing success,” and the teams are proud of putting in long hours.

“Our biggest takeaway was that having the meticulous—almost surgical—precision for move-in paid dividends and has become a best practice for all future projects,” Goveia says.
Willwork and the GPJ team met three times a week with various teams and vendors to create a web-based production schedule for every action and order, along with appropriate labor to support that schedule. Willwork arranged for a two-day seminar at a Boston hotel where top supervisors and key managers from GPJ, IBM and 4 Productions sat in classrooms to get a 30,000-foot perspective of the event planning.

“I want to give credit to the unions,” DeRosa adds. “It was very important for the unions to succeed as well. IBM is coming into their city with a huge conference. Some others were saying the unions can’t get it done. It’s too much, too fast. I saw an exceptional attitude from the unions on site. You could see the guys really worked to be part of something big and part of the success story.”

IBM combined several of its large conferences into IBM Think in 2018, naming it after the company’s famous tagline and delving into technology and business topics with panel discussions led by visionaries in their fields. They talked about emerging technologies that are radically changing the business landscape. IBM Chair, CEO and President Ginni Rometty gave the keynote address on “Building Cognitive Enterprises,” while IBM Analytics General Manager Rob Thomas spoke on “Accelerating the Journey to AI.”

“There’s no AI without IA—information architecture,” Thomas says. “Every client has to go along the journey of the AI ladder, from how you collect data, organize data, analyze data and finally infuse data.”