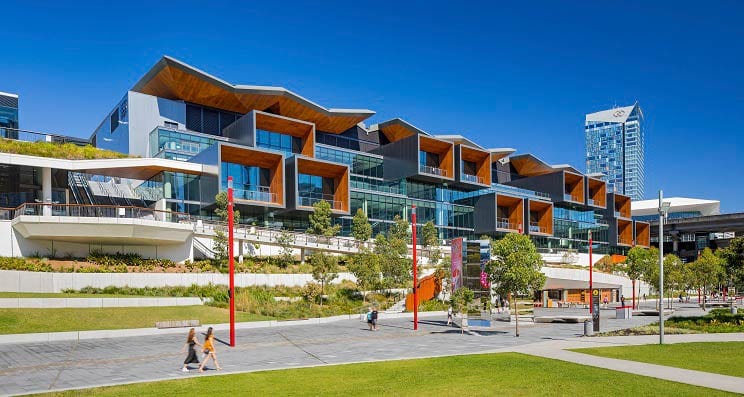 The Darling Harbour Transformation Project, which International Convention Centre Sydney sits at the heart of, has been awarded the Walter Burley Griffin Award for Urban Design Award at the 2018 Australian Institute of Architects National Awards. The project, developed in partnership between the NSW Government, Lendlease and HASSELL + Populous, is Sydney’s most significant urban renewal initiative in more than 20 years.

On presenting the award, the jury praised the transformation for its integration into the public realm and recognized the positive impact it is having on the city of Sydney. “The reinvention of Darling Harbour is a significant moment in Sydney’s urban transformation,” says the jury. “The redevelopment sought to enhance the urban experience—not just for tourists, but for residents and workers. The precinct feels vital, engaging and safe. This is a true urban project of city scale, which will have an important impact on the future of the inner city.”

CEO of ICC Sydney, Geoff Donaghy, says the award further acknowledges the change that Darling Harbour has undergone as a result of its revitalization. “Today, the nation’s premier convention, exhibition and entertainment venue, ICC Sydney, sits at the heart of a dynamic precinct for locals and visitors alike that celebrates the best of Sydney on the waterfront,” says Donaghy. “We’re at the nexus of Sydney’s innovation and entertainment precincts, delivering all that a delegate, visitor or resident could desire.”

NSW Minister for Finance, Services and Property, Victor Dominello says the NSW Government is proud of the public benefit that the multi-billion dollar revitalization of the Darling Harbour precinct has delivered. “This project has completely transformed and enriched Darling Harbour,” says Dominello. “ICC Sydney sits at the epicentre of this revitalization and has played a major role in its activation through its delivery of events and engagement with the community.”

ICC Sydney is Australia’s premier convention, exhibition and entertainment destination and underpins Sydney’s place as one of the world’s most desirable meeting and major events destinations. ICC Sydney is the epicentre of a 20-hectare transformation of Darling Harbour by the NSW Government to highlight Sydney as the first choice in Australia and the Asia Pacific region for the major events industry. ICC Sydney is being delivered by Darling Harbour Live, comprising Lendlease, Hostplus, First State Super, Capella Capital, AEG Ogden and Spotless FM in partnership with the NSW Government. ICC Sydney is operated by globally acclaimed venue manager AEG Ogden. For more info, visit iccsydney.com