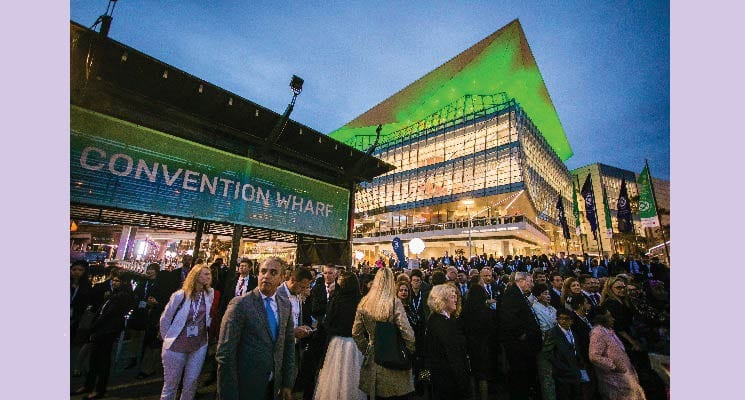 According to a Deloitte Access Economics study, delegates attending events at International Convention Centre Sydney generated $820 million in direct expenditure for the state in its second year of operation, an increase of $35 million on the $785 million direct contribution in 2017. International and interstate visitors helped generate 72 percent ($590 million) of the total expenditure, resulting in more than 1.57 million overnight stays in Sydney accommodation and the creation of 5,248 full time equivalent jobs for the local economy.

A key component of the NSW Government’s suite of infrastructure projects, ICC Sydney is a $1.5 billion development which comprises an industry leading convention center, exhibition center and major entertainment theater. NSW Minister for Finance, Services and Property Victor Dominello said the results of the study demonstrated the remarkable success of ICC Sydney since its opening in December 2016.

“The figures speak for themselves.” says Minister Dominello. “ICC Sydney is a big win for Sydney, providing visitors with world class events, and boosting the economy and creating jobs. The venue has also enriched Darling Harbour and put Sydney on the map as Australia’s number one destination for events and exhibitions.”

Geoff Donaghy, CEO of ICC Sydney, says he is proud of the venue’s achievements in stimulating the local economy while setting new standards for the business events industry. “ICC Sydney is proud to have welcomed another 1.3 million visitors across more than 700 successful events in 2018 and simultaneously enhancing the city’s reputation globally and creating opportunities for our talented, local community,” says Donaghy. “Our world-class operation of ICC Sydney saw our satisfaction ratings improve on an already strong result in 2017, with a near-perfect delegate rating of 99 percent and client rating of 97 percent.”

Donaghy adds, “ICC Sydney’s dual focus on putting its people first and serving the community has been critical to the venue’s strong performance. Our investment in our people and our engagement with the community around us is ultimately what underscores the success of our clients and the experience of our visitors. We firmly believe in equipping our people with the skills they require to succeed, providing careers, not just jobs. This mindset is the foundation of our inclusive and diverse culture and directly correlates with our achievements as a business. This approach to diversity and inclusion extends to the community where we’ve built an incredible network that all come together to make our event delivery possible and create a ripple effect of positive outcomes.”

ICC Sydney’s 2018 results build on an impressive opening year with the venue set up for success in 2019 and beyond having already secured 1,300 leading major national and international events across sectors to 2030.

ICC Sydney is Australia’s premier convention, exhibition and entertainment destination. The showcase international venue underpins Sydney’s place as one of the world’s most desirable meeting and major events destinations. ICC Sydney is the epicentre of a 20-hectare transformation of Darling Harbour by the NSW Government to highlight Sydney as the first choice in Australia and the Asia Pacific region for the major events industry. ICC Sydney is being delivered by Darling Harbour Live, comprising Lendlease, Hostplus, First State Super, Capella Capital, AEG Ogden and Spotless FM in partnership with the NSW Government.
ICC Sydney is operated by globally acclaimed venue manager AEG Ogden. For more info, visit iccsydney.com