ECN magazine is saddened to report that our beloved editor, Arthur Bloberger, passed away Sept. 28 after a nine-week battle with esophageal cancer that had metastasized to his stomach, lymph nodes and liver.

He moved to Las Vegas at the age of three from San Francisco and then spent nearly his entire life in the Entertainment Capital after a brief foray of working at a Madison Avenue advertising agency in New York City in the late ‘70s. Upon his return to Las Vegas, he had lengthy tenures as editor of Today in Las Vegas magazine and the Jewish Reporter. Along the way, he was at the creative helm of many other successful publications, from the nationally circulated SuperShopper and Sweepstakes magazines to other local publications such as Nevada Hospitality magazine and Las Vegas’ first, original city magazines, Las Vegan and LV. He took the helm at ECN in May 2016 and at his passing, he was editor-in-chief of Exhibit City News and his own on-line ‘zine, LasVegaZine.com. 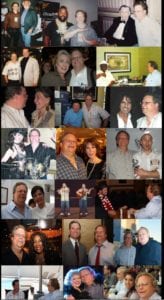 He was blessed with many talents and interests – from graphic design to eloquent writing, from his artistic abilities (both as a cartoonist and a portraitist) to his guitar playing (he specialized in folk, John Denver and Donovan songs–but he loved all music), from his love of vintage comic books and superheroes to professional wrestling, and more. He had starred in several musicals in high school, including Prof. Higgins in My Fair Lady, Snoopy in You’re a Good Man, Charlie Brown, and Eddie Ryan in Funny Girl and loved everything entertainment–and was frequently seen covering the red carpet events in Las Vegas (pictured left).

The staff and writers for ECN, as well as many in the exhibit industry, all share in the loss of this wonderful man and talented editor. ECN Publisher Don Svehla said, “Arthur made many friends in the industry during his two years with us. Our readers will surely miss his professionalism and easy going style.” Art director Thomas Speak said, ““I am very proud of the work Arthur and I did during his two-years with the magazine. Always on the bright side of life, Arthur and his smile will be dearly missed.” Our director of sales, Kathy Anaya, shared, “In the past two years working with Arthur has been such a pleasure as he was a dedicated editor and an awesome team player. He had a zest for life, was very talented and will greatly be missed but never forgotten.” And our office manager, Samanta Arjune, who was shot at the country music festival just three days after Arthur passed away, lamented, ““Arthur was one of the kindest, loving man I have ever met, he enjoyed and loved life. I will truly miss him!”

ECN writer Amber Johnson spoke for many of the ECN writers and contributors when she said, “I am so saddened to hear about Arthur’s passing. I really enjoyed working with him–he was a very nice man” and ECN columnist Lesley Martin echoed those sentiments and said, “I am so sorry to hear. Arthur was a terrific person and excellent editor for ECN.” ECN writer Pat Friedlander shared, “He was such a kind, likeable man who still managed to keep the train on the track. He was fun to work with—and to talk to. My heart will be with all of you.” When notified of Arthur’s passing, Mary Klida, senior marketing & communications manager for the Cobo Center in Detroit, said, “How very sad. He was a wonderful gentleman and a great editor. Please give everyone there a hug from me. His passing is a loss for us all.”

His passing was mourned internationally, as Marianne de Raay, the executive director of AIPC (International Association of Convention Centres), wrote from her home in Belgium, “I am so sorry to hear that Arthur passed away – he was a great editor and I’m sure he’ll be missed as a very kind colleague. I had no idea he was ill and although we only worked by email and never met, I’ll remember him as a great industry colleague.” 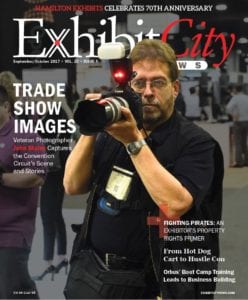 John Staley, a fellow Rancho High School ’74 alumnus who had been Arthur’s close friend for 45 years, was thrilled when Arthur featured him on the cover of the last issue he edited (pictured right). He recalls, “He was simply my best friend. Although the miles between Oregon and Vegas made our relationship different these last few years, our long history of adventures in life are amongst the most fundamental experiences in my life. His passing leaves a hole in my life that will never be filled. He was that kind of friend.” He adds, “Arthur and I became adults together, from our many adventures in New York City (he introduced me to the woman I would marry), to running comic books like gypsies, to a life-long discussion of all things artistic and political. He was a deeply talented man, in so many things and he made them all look easy.”

Arthur truly enjoyed covering the tradeshow industry—from traveling to Orlando for EDPA Access to attending Aluvision’s boot camp in Atlanta as well as writing and editing stories and walking the tradeshow floors at IMEX, CES, and so many more. He was incredibly grateful that his newly adopted tradeshow family nominated him for a Randy Smith Memorial medical assistance grant and, he so wanted to be there in October to thank everyone from the EACA, EDPA Foundation, and the board of the RSMGC for the financial assistance that made it easier for him to battle the cancer and ultimately to cover his end-of-life costs.

He is survived by his daughter Alexis (Greg) Baker and four grandchildren (Ruby, Lily, Greyton and Gigi), brother Darrin, sisters Fran, Sonny and Carolynn, his sweetheart of nearly six years, Jeanne, nieces (Ginger, Cinnamon, Sugar, Rebecca, Erina), nephews (Ian, Andre), cousins and lots of treasured friends. He was predeceased by his parents, James and Barbara, sister Cindy and brother Joey. RIP Arthur Bloberger, you will never be forgotten and you’ll live on in our hearts and memories.