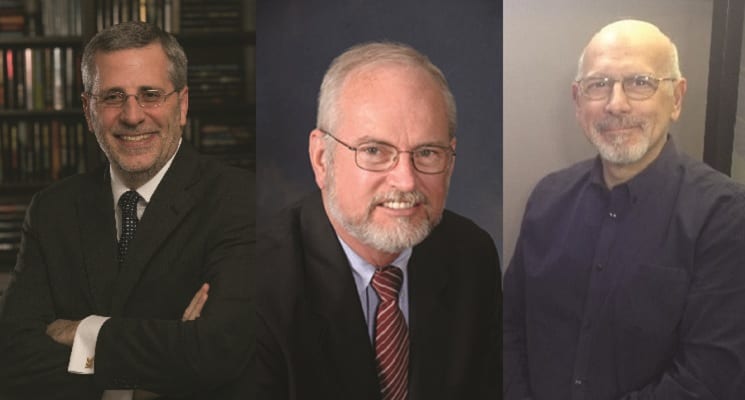 Some people call it guerilla marketing. Others call it stealing. But one thing is certain: Few circumstances will make a show organizer’s blood boil faster than finding companies trying to do business with attendees of a show they didn’t pay to exhibit at. The vernacular for the practice in the tradeshow world is either suitcasing or outboarding—terminology that was invented by the exhibition industry and thus wouldn’t be understood in any other setting. But the truth is they are sometimes not even understood well inside the tradeshow arena, at least in more nuanced situations, leading to awkward moments at best and the eventual destruction of a show if left unchecked.

The generally-agreed-upon definitions of the offenses at their most basic are straightforward: Suitcasing is the practice of attending a show as an attendee – or even just loitering around the non-show-floor areas where showgoers congregate—and trying to snare business by handing out sales materials, setting up meetings or filling someone’s ear with a sales pitch for goods or services. Suitcasing’s ugly cousin is outboarding—the act of piggy-backing off of a show by hosting events, meetings, marketing activations, parties and more in the vicinity of a tradeshow without being an exhibitor or going through show management to do so.

And while there may be 50 shades of gray in the scenarios possible for each, industry experts say that most of the time, ignorance is not a defense. “I believe that all companies that suitcase or outboard a show know full well that they are doing something inappropriate,” says David Audrain, executive director for the Society of Independent Show Organizers. In Audrain’s eyes, the matter is very black and white: If you are trying to engage in any way with a show you aren’t paying to do business at, and if you are doing anything that undermines the success of paying exhibitors, then it is theft from the show and from the businesses that funded it.

Charles Olentine, CEO of exhibition consultancy firm Consult NC Inc., is somewhat understanding towards small or new companies that may not understand suitcasing policies well, and he advocates for well-articulated show policies to educate them. But that is where charity ends, and for those who are deliberately gaming the system, Olentine is decidedly more merciless. “To call suitcasers ‘parasites’ is being charitable,” he says. “I’ve had non-exhibitors who are aware of the policies dare us to find them. Needless to say, one should actively hunt them down.”

For a show floor, Audrain says, the practices of suitcasing and outboarding can be toxic. “Tradeshows are expensive to produce and most of the revenue comes from the exhibitors. If a company suitcases or outboards a show, they are basically stealing access to the attendees and stealing from the exhibitors that have paid to support the show,” he explains. “If exhibitors start to feel like companies don’t need to exhibit to get the value of the show and so stop exhibiting to instead suitcase or outboard themselves, then it can even kill the event, and then everyone loses.”

While one might initially think of suitcasing as activities directed towards attendees in the aisles and lounges of a show, there is another form of the practice – one that is even more insidious—that is happening right inside an exhibitor’s booth, and its impact has a double whammy. This suitcaser is trying to sell to the exhibitor, says Al Mercuro, senior account director for Genesis Exhibits, and it’s often the worst suitcasing problem a show has. “I’ve seen my clients trapped in a booth space because they’re working, and someone comes in and tries to sell to them,” he says. “It’s really unfair to do that to someone and it happens more than you think.” While a booth staffer is trying to extricate from an unwanted sales pitch, their potential leads are walking by, and now both the show and the exhibitor are losing out because of the behavior. “To have someone come into the booth and take your valuable time is really unethical,” says Mercuro, who notes that it is a nuisance that should be reported to show management.

Mercuro also believes that the number of people who don’t understand that what they are doing is wrong is a very small percentage of offenders. “For the most part I think it’s part of a calculated marketing scheme—maybe it’s to save money—but it’s unethical,” he says. The only latitude he extends is to college kids or others who are casing a show looking for job prospects. It’s still not a good practice, he says, but they probably don’t know better.

But in every other scenario, Mercuro says that it behooves show organizers to nip suitcasing and outboarding in the bud by whatever means necessary to preserve the show floor environment for the people who belong there.

That might mean posting an abundance of signage, confronting offenders in the act and asking them to leave, or screening out past offenders in future years. “Education and communication are the first lines of defense,” Olentine says. “One commonly used practice is to include a statement in the registration process outlining suitcasing and outboarding policies and that violators will be removed from the show premises. Try to make the potential suitcasers aware that you are monitoring for the practice and will take action.”

And though confrontations are awkward, show organizers need to be willing to have them if they are to protect the sales environment they have worked so hard to create. “Confronting suitcasers is difficult and uncomfortable,” Olentine acknowledges. But breaking up meetings, pulling badges and escorting people from the property for violating the suitcasing and outboarding rules sends the surest message to everyone that it won’t be tolerated.

However, first organizers need to make sure everyone is on the same page about the variety of ways that those two infractions can be made. Can non-exhibiting businesses schedule off-site meetings with their current clients? Can paying exhibitors host events at non-show venues that overlap official show events? Can exhibitors allow non-exhibiting companies to have a presence in their booth? What about the use of street marketing teams? Bathroom advertising?

The matter can get murky when it is paying exhibitors doing the suspected suitcasing or outboarding, though those infractions are more likely to be handled through a conversation and some education rather than ouster from a show floor. Things like visiting other booths to sell, setting up unsanctioned events during the show, and other marketing activities that work around the official show sponsorship system hurt a show’s bottom line, deprive an exhibitor of business partnership with the show, and put exhibitors at risk of not being invited back to future events. “For an exhibitor, if they have an idea for any activity – even a flash mob – just talk to the show organizer,” says Audrain. “If it doesn’t negatively impact other exhibitors or keep attendees from the exhibit floor, they will most likely be happy to work with the exhibitor.”

Though many tradeshows do so, when a show allows non-exhibiting manufacturers to register as attendees, things can get tricky too. Audrain says shows need to have crystal clear communication on what the policies are. In the presence of those, he believes most non-exhibiting manufacturers at shows are trying to follow the rules and do honest business.

But Audrain says the reality is that, with very few exceptions, companies should be registering as exhibitors instead. “If they think a show is valuable enough to spend time and money to attend, and that there are customers or prospective customers that are attending that they wish to meet with, then they really should be exhibiting,” he says. “In fact, most customers or prospects will likely wonder, to themselves at least, why these people want to meet with them there if they are not exhibiting. Maybe they will wonder if the company is having financial problems and cannot afford to exhibit.”

Mercuro agrees. “I would think they would want to exhibit or be a sponsor rather than working outside of a show,” he says. “Exhibiting lends legitimacy to a company and I wouldn’t have respect for a company that was suitcasing or outboarding.”

Another tactic to piggyback off of a show is for a non-exhibiting company to buy advertising across the host city, placing ads on public transportation, billboards, hotel TVs and more to capitalize on the influx of its target market. There is little a show can directly do about it, says Audrain, but he suspects such practices hurt companies in the long run rather than help them. “What is an attendee to think when they see an ad for a company which they can’t find at the show?” he says. “They are likely to be confused or annoyed if they wasted their time trying to find them. Why would a company spend the money on advertising during a show to reach the attendee audience but not be part of the show? Seems pretty stupid to me.”

Although they can’t exactly prevent such practices, tradeshows, especially those with some size, can have a strong influence on the host city in order to curb outboarding and rogue advertising campaigns, Olentine says. “This is where the organizer must work closely with the city convention bureaus,” he says. “They need to know that the organizer does not appreciate those practices and that they will jeopardize a return to the city.” Likewise, he says, contracts with convention centers and show hotels must specify the exclusivity of marketing opportunities for show organizers. City-wide hotel blocks can ensure that banquet halls, conference rooms and corporate hospitality suites can’t be booked without show organizer approval, and those agreements can have teeth. “For example,” Olentine says, “with the International Production and Processing Show, we wrote clauses in our hotel contracts penalizing the hotel if they are found to violate the non-exhibitors meeting room booking policy, and the penalties were substantial. We found that hotels worked very closely with management to cross-check meeting rooms. However,” he adds, “it is very difficult to prevent non-exhibiting companies from using hotels outside the block, and it’s virtually impossible to prevent meetings at restaurants.”

Along with good communication and teams of people policing a show for offenders, something else that may curtail suitcasing and outboarding, Mercuro says, is for show organizers to look for ways to bring transgressors into the fold. Abundant sponsorship opportunities and myriad thresholds for becoming an exhibitor could naturally prevent some of those infractions, he says, helping companies and the show at the same time. It won’t stop the intentional freeloaders from trying to leech off of the event, but it could give those that mean well a path to legitimacy. “In marketing, you want to think outside of the box and make sure you stand out,” he says, “but if you tie it all together with the tradeshow, it sends a much stronger message to your potential customer that you are a company they can take seriously.”