Industry News: The Don & Mike Show Goes On The Road

(Pictured above L-R: Mark Zimmerman and Mike Morrison at ESCA)

“The Don and Mike Show” was on the road in June and July with in-person interviews at The Summer Educational Conference in Santa Fe, New Mexico for the Exhibition Services and Contractors Association (ESCA) and also the Chicago Randy, an ancillary event supporting The Randy Smith Memorial Golf Classic, now known as “The Randy” which will take place in October in Braselton, Georgia, at Chateau Elan Golf Courses.

“We were able to get some great one on one interviews with some of the suppliers at the ESCA conference which we have shared on multiple shows in the past several weeks,” says Mike Morrison, co-host of the show. “The same effect happened at The Chicago Randy where we were able to provide a compilation of statements made by the attendees of the event and also the Midwest Chapter of the EDPA who helped execute the yearly event … 16 years is a long time to be supporting a great cause.”  The original Randy in October will be celebrating 25 years on October 4, sign-ups and information can be found at RSMGC.org. 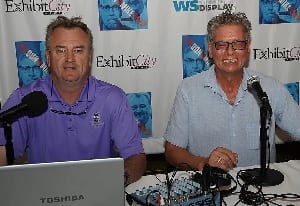 “The Don and Mike Show” also participated in the Get Out of The Gutter outing in Atlanta in August for the same cause and will be at the EDPA Northeast Chapter Classic Golf Outing on Sept. 16 at Shaker Hills Country Club in Harvard, Mass., which helps fund industry scholarships for member’s children through the EDPA Foundation Scholarship Program.

Upcoming 2019 appearances for the show will include the October 4 Randy event in Braselton, Georgia; EDPA Access in Tucson, Arizona, in December along with a stop at Expo! Expo! for IAEE in December as well.

“We have had great interviews so far in 2019 as we approach the 50,000 listens for our show … and we are always open to having more industry participants come on and share an interview,” according to Morrison. “Developing a weekly following for the show is a challenging task as we know our listeners, both active and perspective, are always busy … but we hope they find time to hear the shows, participate in our weekly poll questions at TheDonAndMikeShow.net and call or e-mail in their requests for future topics.”

“The Don and Mike Show” is in its third year of weekly podcasts which focuses on tradeshows, events and experiential marketing issues in today’s world.  Shows can be heard at ExhibitCityNews.com, TheDonAndMikeShow.net, Facebook, Twitter and LinkedIn group pages as well as iTunes, Google Play and many other podcast locations such as Spotify, Stitcher, Podcast Addict, TuneIn.FM and more.

Morrison is still extoling the features of the www.TheDonandMikeShow.net website and says, “The Don and Mike Show website (www.TheDonAndMikeShow.net) has a lot of varying features where our listeners can participate.  “One of those features is a weekly poll related to our industries where answers are given to the audience each Friday during the regular Don and Mike Show. Also, a form on the landing page allows listeners to submit topics for discussion and make recommendations for future guests or the show.

“There’s also a shopping area for Don and Mike Show merchandise as well as every previous episode of the shows done since the first show aired on ExhibitCityNews.com July 7, 2017,” Morrison adds. “In addition, other related podcasts can be found on the site and much more.”

They celebrated their second anniversary of podcasting the show on July 5 with 118 episodes available on their website. They did two podcasts a week for nearly six months starting in 2019 – keeping their original Friday podcasts and adding a Tuesday Don & Mike Show–Extra, and have now reached nearly 50,000 listens. They’ve put the Tuesday shows, which highlighted organizational and association news with interviews from EDPA, ESCA, IAEE, EACA and many more organizations related to Tradeshows, Events and Experiential Marketing, on hiatus.

Brought to You by SMT Expo

The podcast is “Brought to You by SMT Expo,” their first sponsor. A division of Glenmore Industries, an OEM manufacturer of a wide variety of home, industrial and automotive products, SMT Expo is headquartered in Edison, N.J., and has manufacturing facilities and offices in China, Taiwan, Vietnam and the U.K.

SMT stands for Smart Modular Technology and is the exclusive provider of the industry’s leading, full floorplan, fabric booth system and the sole manufacturer of this revolutionary tool-free system.

Joe Cascio, SVP sales and marketing at SMT Expo, says, “Just as Don and Mike strive to stay at the cutting edge of the live events industry, SMT Expo is committed to enhanced creativity to improve the overall experience within our industry.”

Morrison adds, “Shooting the Facebook Live videos from the Randy Smith Memorial Golf Classic at EXHIBITORLIVE, as well as from the show floor at EXHIBITORLIVE 2019, and from the ACE Awards presentation truly lets us cover the industry in a way no one else is doing.”

Interviews include these industry people:

Dave Sterne – The Inside Track

The Don and Mike Show: Shootings, Safety, Schools, Side Hustles, Mark Zimmerman and Brandon Arvizu on the show!

The Don and Mike Show: Disney Permits Explained, CES Sex Toys and The Randy and much more

The Don and Mike Show: Permits for Trade Shows in Orlando, Amazon impact in industry and Best of Show Product

The Don and Mike Show: 2nd Anniversary show, The Randy Smith Memorial with Rich Johnson and Sonny Goyal from ABCOMrents

The Don and Mike Show: Candy Adams, The Booth Mom and EDPA Board Member Amanda Helgemoe

The Don and Mike Show: #exhibitionsday wrap up with Roger Rickard and Nicole Bowman and Iggy Rosenberg from Lightswitch

The Don and Mike Show: ExhibitionsDay 2019 wrap up and Reid Sherwood from the RSMGC Board of Directors

The Don and Mike Show: Dasher Lowe from EDPA and Kelli Liles from Old Dominion

The Don and Mike Show: Julie Pazina and Zach Wetterling from Edlen Electric along with more industry news!