Is It Time to Panic?

Recently, a number of tradeshows canceled, citing COVID concerns due to the Delta variant.  Is this the time to panic?  No, it’s not the time to panic. It is time to view things in perspective, and analyze the data.

Tradeshows have proven to be safe, and most major convention centers are GBAC certified.  Yes, some shows have canceled during the past month; but many, many more shows have opened—safely and successfully—and more than 1,000 shows and events have not canceled.

COVID-19 is serious, contagious and potentially fatal; but it is not the end of the world. The Delta variant, “as contagious as chicken pox,” is currently producing a record number of positive tests and hospitalizations in some states.  But the average number of COVID deaths so far this summer is significantly lower than last January.

What does an analysis of the COVID data show?

What about the Delta variant?

The Delta variant first appeared in India in October 2020, and moved into Great Britain in early 2021.  The first reported Delta cases in the U.S. were in Texas in May; and by July 1, the variant had infected people in every state in the U.S.  Over the July 4 holiday, Delta hit Provincetown, Mass.; the CDC believed the number of breakthrough cases there were so numerous and unexpected, that they reversed course, and recommended everyone in high risk areas wear a mask.  A final review of Provincetown cases showed: of the more than 1,000 documented positive tests, there were seven hospitalizations and zero deaths.  That’s the good news.  But during this time, the virus was spreading rapidly in states with a larger percentage of unvaccinated people. 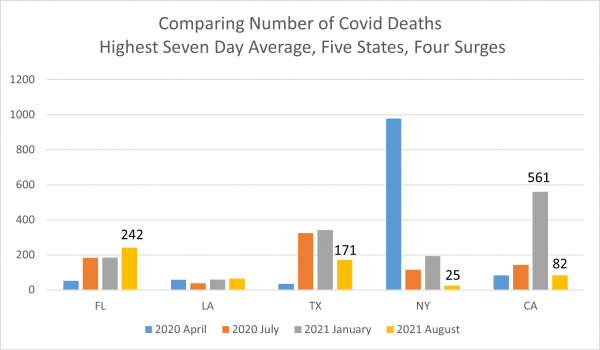 California, Texas, Florida and New York are the four most populous states in the country.  During the first surge, New York averaged almost a thousand deaths a day (a total of 6,846 deaths in a one week period).  California experienced 3,927 deaths in one week last January. By comparison, Florida (a state with a population 2.6 million higher than New York) had 1,520 deaths over the seven days between August 19 and August 25. Florida and Louisiana have set record numbers, and they may go higher yet. But the question to ask, to keep everything in perspective: is it likely we will see seven day average numbers like those of New York in April of 2020, or those in California last January?

Tradeshows have been happening during the pandemic for more than a year, although most didn’t start occurring until this past spring. Chicago Auto attracted more than 100,000 people in July, with no reported COVID cases. Lollapalooza attracted a crowd of 385,000; and according to an August 12 Chicago Sun Times article, there were “203 positive tests, zero hospitalizations and zero deaths” (the show concluded August 1).  There are more than 800 shows planned between August and the end of the year, and this number does not include myriad hotel shows and regional events.

It is critical to live our lives, and not live in constant fear of what might happen.

A version of this story originally appeared in the Sept./Oct. 2021 issue of Exhibit City News, p. 16. For original layout, visit https://issuu.com/exhibitcitynews/docs/ecn_sept-oct_2021 (link will go live on September 1).