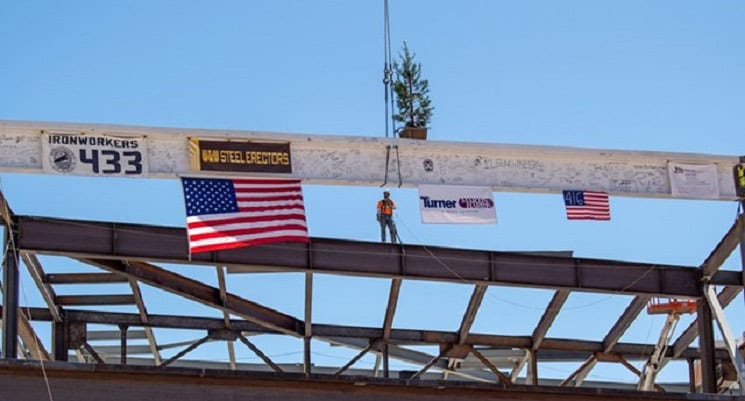 On Aug. 20, The Las Vegas Convention and Visitors Authority celebrated a tremendous milestone in the progress of its 1.4 million-square-foot expansion as the final beam was hoisted above the 600,000-square-foot exhibit hall of the facility.

Some 800 tradesmen and tradeswomen currently working on the construction site signed a 60-foot- long, 90,000-pound beam that is now integrated into the expansion project’s new exhibit hall, cementing their contributions to Las Vegas’ continued legacy as a leading business destination. The event also included an unveiling of the American flag to be hung on site.

The 1.4 million-square-foot expansion will be followed by a complete renovation and modernization of the LVCC’s existing 3.2 million square feet. The total budget for the expansion and renovation is currently $1.48 billion.

“Supporting the Las Vegas destination through growing meetings and exhibitions is just one of many ways we fill the nearly 150,000 hotel rooms in our destination and can accommodate the nearly 15,000 of additional hotel rooms that are on the way,” says Brian Yost, LVCVA chief operating officer.

The raising of the signed beam in the new exhibit hall celebrates a significant milestone in the development of the expansion project. In late-October, LVCVA will officially “top out” the expansion when tradesmen and tradeswomen reach the highest point of the expansion and fully enclose the facility. To date, more than 25,000 tons of structural steel and 47,000 cubic yards of concrete have been utilized on the project site. The expansion is on schedule and 50 percent complete.

The expansion is scheduled for completion in December 2020 and the facility will welcome its first full-facility event in January 2021 during CES, the largest and most influential technology event on the planet. More than 180,000 attendees attended CES in 2019.

The convention center expansion and renovation is to allow for the Las Vegas destination to remain the leading destination for business travel.

Planning is also underway for development of the first commercial underground people mover for the LVCC via an underground tunnel that will have three convenient locations throughout the span of the entire facility.

Elon Musk’s The Boring Company has been tapped to design and construct the innovative system that is the next evolution for efficient transportation models in high-traffic areas.

In addition to the LVCC expansion and renovation, continued investment in the meeting and convention industry remains strong in Las Vegas with nearly 3.5 million additional square feet of meeting space coming online within the next five years.

About the Las Vegas Meetings Industry

The Las Vegas Convention and Visitors Authority (LVCVA) is charged with marketing Southern Nevada as a tourism and convention destination worldwide, and also with operating the Las Vegas Convention Center. With nearly 150,000 hotel rooms in Las Vegas alone and more than 11 million square feet of meeting and exhibit space citywide, the LVCVA’s mission centers on attracting ever increasing numbers of leisure and business visitors to the area. For more info, visit www.lvcva.com.