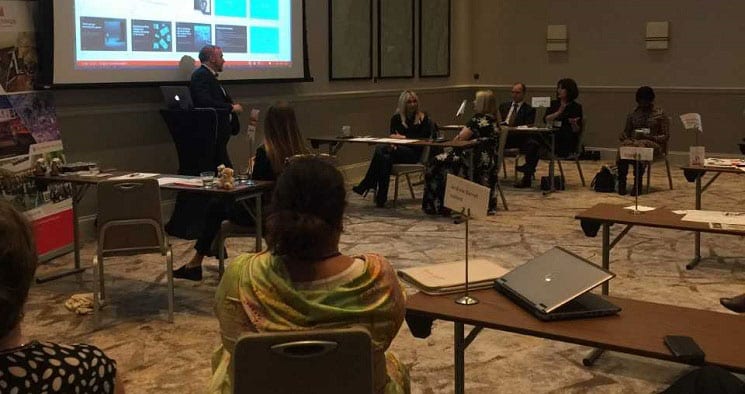 A poll of a mixed group of buyers and suppliers of solutions and services for business Meetings, Incentives, Conference and Events (MICE) has indicated an expectation of digital disruption in the industry.

The sixth event hosted in two years by MICE-in-the-bag was held in London at The Marriott, Regent’s Park, The Hilton Paddington and Millenium Gloucester hotels.

It included businesses from a broad range of European countries including Greece, Malta, Slovenia, UK, Germany, Spain and Holland. The events are invitation-only gatherings between MICE suppliers and budget-approved buyers.

In a discussion between representatives of the whole supply chain hosted by Shift Actions’ Justin Roux, 60 percent of the audience believed that a significant digital disruption could be expected inside the next five years.

This followed a unanimous show of no hands when asked if there was sufficient clarity of needs and mutual understanding up and down the supply chain. Only 2 percent of the audience felt there was too much complexity in the industry and none felt that a MICE-specific digital solution currently existed.

Other concerns included the effects of Brexit, emerging destinations and a need for qualified B2B meetings of the MICE-in-the-bag format.

“There is clearly tension in the supply chain that MICE-in-the-bag aims to ease with its clever event formula,” says Justin Roux of Shift Actions consultancy.

“But, on a global scale, existing market-place platforms such as Expedia are simply not suitable for business-scale events because the risk and funding models are totally different to leisure travel. There are doubts as to whether a market-place solution is a workable solution but the attendees have certainly voiced a need for change.”

MICE-in-the-bag is a unique B2B company that brings together buyers and suppliers from the Meetings, Incentives, Conference and Exhibitions (MICE) industries. It is targeted at reducing the prospective marketing spend for MICE suppliers and providing more effective service for buyers. According to the World Travel and Tourism Council, MICE industries currently make up $650 billion of the $5.7 trillion global tourism industry. Its concept involves the creation of pop-up, one-stop meeting environments for sellers and buyers of MICE. For more info, visit www.miceinthebag.com.