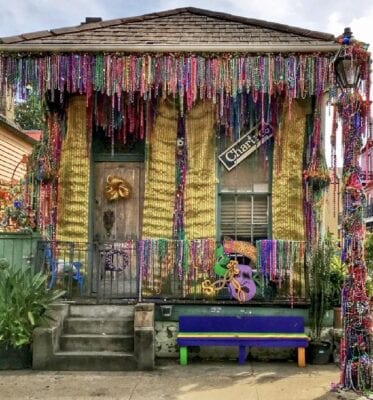 New Orleans tourism industry officials have joined Rex, the King of Carnival in issuing Rex’s annual edict to the world that Carnival season is upon us and will be celebrated in unique ways due to the COVID-19 pandemic.

Carnival begins each year January 6, known as “Twelfth Night,” and lasts through Mardi Gras day, which falls on Tuesday, Feb. 16. Parades and large gatherings are banned to keep everyone safe during COVID this year, but New Orleanians have come up with virtual and alternative celebrations, proving that nothing will stop the sacred Carnival tradition, or limit our creative spirit. 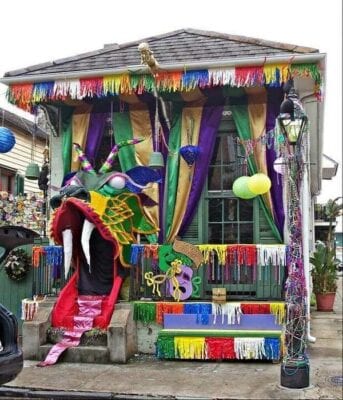 • The Krewe of House Floats has formed through a grassroots effort, hiring laid off float builders to transform homes into parade floats and bringing the spirit of Mardi Gras parades throughout the city in a safe way.
• Commander’s Palace will be hosting a virtual Wine & Cheese Party from Mardi Gras World
• The New Orleans Music Company will be producing a series of virtual performances and cultural lectures
• New Orleans School of Cooking will host Mardi Gras King Cake Zoom cooking classes
• Restaurants like the Pelican Club have partnered with Kern Enterprises to decorate their dining rooms
• Multiple parade krewes are hosting scavenger hunts for their throws
• The Royal Sonesta will be hosting a Mardi Gras MASKerade
• For more, visit www.neworleans.com. 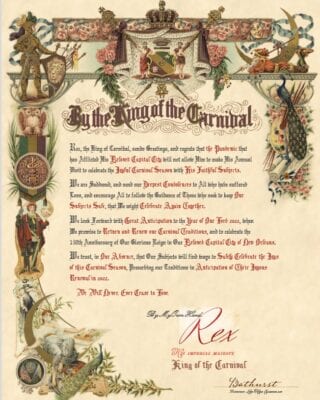 “The Rex Royal proclamation continues a carnival tradition more than a century old,” says Stephen Perry, president and CEO of New Orleans & Company. “Although Rex and other organizations will not hold their traditional parades through the streets on Mardi Gras Day 2021, we join Rex in inviting visitors to come enjoy New Orleans—safely within the guidelines—and learn about the majesty of our Carnival traditions.”

The Rex Organization began creating its Royal Invitation in 1872 when a group of young New Orleans leaders decided to issue invitations and a proclamation, inviting all to come to the Crescent City to join in its unique Mardi Gras celebration. In the days before mass media, broadcast, and tourism industries, the beautiful art posters and brochures were distributed in railroad stations, plastered on train cars, posted in centers of commerce, and placed in public buildings around the nation in major U.S. cities.

The 2021 Royal Invitation proclaims, “We trust, in Our Absence, that Our Subjects will find ways to Safely Celebrate the Joys of this Carnival Season, Preserving our Traditions in Anticipation of Their Joyous Renewal in 2022.”

Each year, New Orleans & Company issues an electronic version of the Invitation to the nation and to international destinations, as well as over 60,000 travel trade professionals and tour operators.

New Orleans & Company is a nationally accredited, 1,100-member destination marketing organization and the largest and most successful private economic development corporation in Louisiana. They help create $9.5 billion in new capital each year—more than any other business sector—by attracting millions of visitors, special events and conventions. New Orleans & Company and its members influence thousands of decision-makers and millions of visitors to choose New Orleans through direct sales, marketing, public relations, branding and visitor services at our New Orleans headquarters and offices in Washington, D.C., New York, Chicago and five countries. Consistently recognized as one of the top five destination marketing organizations in the country, New Orleans & Company celebrated its 60th anniversary in 2019. For more info, visit www.neworleans.com