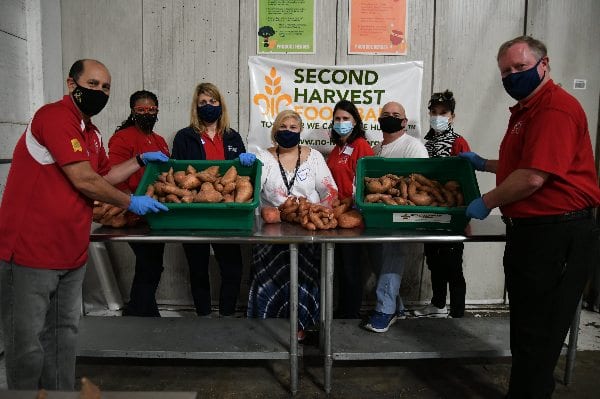 (Pictured above and below: Volunteers from the New Orleans Ernest N. Morial Convention Center inside the Second Harvest Food Bank Cooler after sorting more than 3,000 pounds of sweet potatoes) 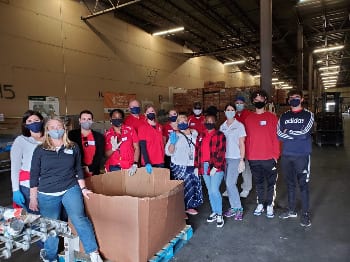 Employees of the New Orleans Ernest N. Morial Convention Center took personal time off to volunteer at Second Harvest Food Bank Thursday—and there’s a special reason why. The National Automobile Dealers Association cancelled its in-person show in February but remained committed to its tradition of making a philanthropic donation to a local organization in the city where the annual show is held. In response, convention center employees donated their time to volunteer.

This year, NADA donated $25,000 to the New Orleans Second Harvest Food Bank in response to the alarming increase in food insecurity in the region caused by the pandemic. Due to the pandemic, Second Harvest has nearly doubled its food distribution despite a drastic increase in the organization’s operating costs. Second Harvest anticipates its need to remain elevated through 2021.

“Fighting hunger is a community-wide effort, and simply put, we need both monetary and volunteer donations to make our organization run smoothly,” says President and CEO of Second Harvest Food Bank Natalie Jayroe (pictured left). “Every single meal we provide to a family, a child or a senior is because of donations like NADA’s and volunteer efforts such as the convention center team members. These individuals have opened their hearts. Words cannot fully express my gratitude for those that have stepped up during this crisis.”

One in five households in Louisiana is at risk of hunger. Across the state and region, the rising cost of food, housing, and utilities, coupled with high unemployment due to COVID-19, has increased the need for emergency food assistance.

“I am certainly proud of our employees,” says MCCNO President Michael J. Sawaya (pictured right). “I am also proud of NADA. Even though they had to cancel their show, they held true to their commitment. After a year like 2020, the impact this money will have on our community will reach a little farther and wider than ever before.” 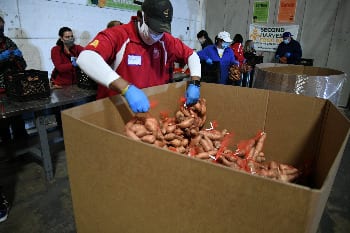 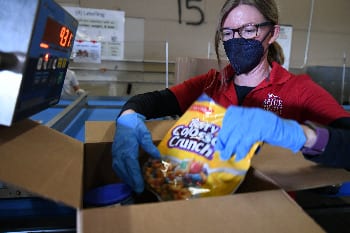 With 1.1 million square feet of prime exhibit space, in an entirely contiguous hall, the New Orleans Ernest N. Morial Convention Center provides the largest single exhibit space in the country, features an award-winning staff, first class amenities, and is the sixth largest convention center in the nation. A leading contributor to the city’s robust tourism economy, the convention center’s event activity has produced $90.1 billion in economic impact since its 1985 opening, including $5.7 billion in new tax revenue for state and local governments. For more info, visit mccno.com

Second Harvest Food Bank is an affiliated ministry of the Roman Catholic Archdiocese of New Orleans, a member of Feeding America and a United Way Partner Agency. Second Harvest leads the fight against hunger and building food security in South Louisiana by providing food access, advocacy, education and disaster response.  Second Harvest provides food to more than 700 partners and programs across 23 parishes, from the Mississippi border to the Texas state line. Together, they make up the largest charitable anti-hunger network in the state. With their community’s help, they make food security a reality for every household in South Louisiana. Since the start of the coronavirus emergency in March, Second Harvest has distributed more than 50 million pounds of food and supplies to residents across 23 parishes of South Louisiana. This is more than double what the food bank delivered during the same period a year ago. Second Harvest staff, volunteers and community partners have also distributed more than 5 million pounds of supplies to recent hurricane survivors in Southwest Louisiana. To join them in the fight to end hunger by volunteering or donating, visit www.no-hunger.org. Follow them on Twitter at www.Twitter.com/2ndHarvestGNOA; fan them on Facebook at www.Facebook.com/2ndHarvestGNOA or Instagram at @2ndHarvestGNOA