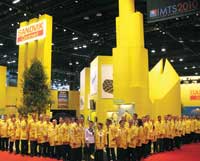 IMTS was held at McCormick Place on September 13-18.


These are the latest round of reforms to be announced and are part of a series of changes that will be phased in as a result of the historic legislation passed by the Illinois General Assembly last May.

“These are substantive changes that allow us to radically reform and improve how we conduct our convention business in Chicago,” said Jim Reilly, Trustee of the Metropolitan Pier and Exposition Authority (MPEA), which owns and operates McCormick Place. “Our present and future customers will undoubtedly be the biggest beneficiaries of these reforms in terms of cost-savings and more flexibility.”

According to the Chicago Convention & Tourism Bureau, the McCormick Place reforms have already resulted in nearly a dozen tradeshows either re-committing to host shows in Chicago or committing to bring their business to Chicago for the first time.

Collectively, those commitments represent more than $1.6 billion in estimated direct expenditures for Chicago during the next decade.

“These Phase II reforms will provide even greater cost savings for our show organizers, exhibitors and attendees,” said David Causton, McCormick Place General Manager. “We received much positive feedback about our Phase I reforms and anticipate that our existing and prospective customers will welcome this next round of reforms as well.”

The reforms were recently met with praise by the International Manufacturing Technology Show (IMTS), which was held at McCormick Place on September 13-18.

“Our exhibitor and visitors enjoyed one of the best IMTS shows in the last 20 years,” said Peter Eelman, vice president of Exhibitions and Communications, Association for Manufacturing Technology (AMT). “The feedback I received from my exhibitors was universally positive. They enjoyed a calm, organized move-in. Chicago is now competitive with any convention city in the country. We have a lot of exhibitors, a lot of square footage and a lot of happy people.”

“Customers came with very specific objectives and were looking for solutions to make them more productive,” said Daniel Janka, president of MAG and chairman of AMT. “The new work rules at McCormick Place were well-received by exhibitors.”

IMTS recently committed to McCormick Place for IMTS 2012, as a direct result of the convention reforms.

“We are thrilled to be in Chicago because it is the best place to do business,” said Eelman. “Never before has that been clearer than right now, with the implementation of the historic McCormick Place reforms.”

Orgill’s 2010 Fall Dealer Market, which was held on Aug 12-14 at McCormick Place, also witnessed the benefits from the new work rules.

“Our move-in went extremely well and our exhibitors have already commented on how much easier it was for them to set-up their booths under the new work-rule changes,” said Ron Beal, CEO of Orgill. “They’re also seeing a number of cost savings. These are tangible improvements at McCormick Place that we appreciate and we expect other tradeshows will too.”

GES, the official services provider for Orgill 2010, echoed those comments.

“It’s a new day for exhibitions in Chicago,” said John Patronski, executive VP of industry development for GES. “The Phase I implementation of changes were very positive, focusing on reduced costs with the introduction of exhibitor rights. We’re excited about the added value these changes provide to show management and exhibitors.

“Orgill’s 2010 Fall Dealer Market was the first opportunity for GES and our union partners to move in, set up, tear down and move out a show under the new rules,” said Patronski. “We appreciate the customer service that our union partners provided to Orgill and its exhibitors. Together, we executed a very successful show, resulting in a more hassle-free and friendly environment with reduced costs.”

Exhibiting companies believe the reforms to be a positive development as well.

“National Nail appreciates the work that has been done to make Chicago more competitive for exhibitors,” said Paul Mehok, VP of business development for National Nail. “The new rules helped our company reduce costs at the Orgill Fall Dealer Market and our workers were friendly and helpful.”

This industry support was music to the ears of McCormick management.

“We are very pleased with the feedback we have received from Orgill and its exhibitors,” said Causton.

The reforms at McCormick place are also grabbing the attention of other industry professionals.

Representatives from Freeman told ECN that they are pleased the MPEA is committed to enhancing the experience for the exhibitor, attendee and organizer.

Jim Wurm, executive director of the Exhibitor Appointed Contractors Association, offered high praise for the reforms and believes they should have a pioneering effect throughout the industry.

“In my view, McCormick Place is setting the pace for all other U.S. convention centers,” said Wurm. “They have been through a gauntlet of negative press in the past year and have come out the other side better than ever. Reduced parking costs and free Wi-Fi are just the icing on the cake for the many benefits exhibitors will enjoy in Chicago at McCormick Place. Other facilities should take notice. McCormick Place makes it clear that when it comes to providing great value, the game is on!”

• Effective today, free WiFi is available throughout the convention center, including all common hallways, exhibit halls, and meeting rooms; McCormick Place is the largest convention center in the U.S. to provide this amenity.

• The parking rate will be reduced from $19 to $14 in Lot B (the surface lot) effective immediately.

• Completion of the refinancing of MPEA’s debt will provide greater financial stability for the convention center, while funding an expansion of the on-site Hyatt Regency McCormick Place Hotel.

• Hotel expansion is moving forward and MPEA has engaged TVS Design to assist in preparing the design and development documents. Anticipated completion date for the hotel expansion is December, 2014.

• A 23-member Advisory Council has been created to oversee and advise the implementation of reforms; the Council includes show organizers, exhibitors, labor, service and exhibitor contractors and MPEA and CCTB management.

• Exhibitors can bring food into McCormick Place from the outside for consumption by employees.

• A Request for Proposals (RFP) for a management company to run McCormick Place was released September 15. Prospective companies toured the facilities October 5. First phase proposals are due November 9. A short list will be developed by December 14. A selection will be made by April 29, 2011.