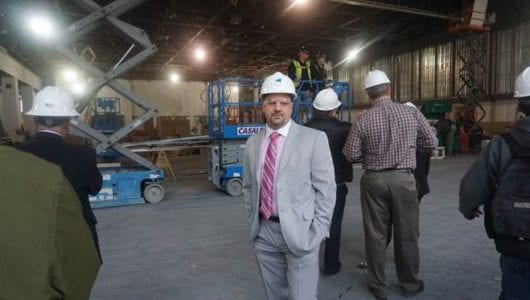 The Albany Convention Center Authority (ACCA) and SMG welcomed members of the media for an exclusive “glimpse” inside the Albany Capital Center on November 15, 2016.

The Albany Capital Center will officially open on March 2, 2017, in conjunction with the MAAC basketball tournament, providing ample area for fan fest activities and the first opportunity for public viewing of the facility. Today, members of the media received a sneak peek of the glass-encased main entry, the unique Capital Room boardroom, large pre-function areas, 10,000 square-feet of spacious meeting rooms, the 3,000 square-foot, full-service catering kitchen, and the 22,500 square-foot, clear span multipurpose ballroom with the added capacity for three full size basketball courts in support of tournament play at the Times Union Center. 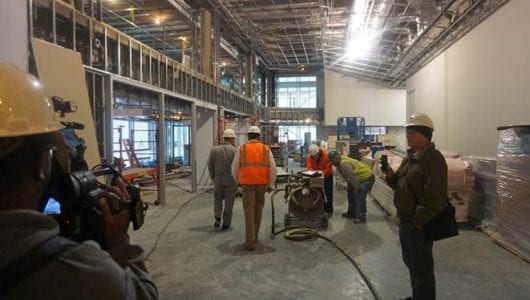 At right, Tour moving through the Prefunction space off of the Capital Room and main entrance of the Albany Capital Center

Members of the media were greeted by ACCA Chairman Gavin Donohue and SMG Regional General Manager Bob Belber before being led on a walking tour by Albany Capital Center General Manager Doug McClaine.

“No longer do we have to envision what will take shape inside and out of the new, modern, Albany Capital Center. With more than 75 percent of construction complete and the building fully-enclosed, we can now see for ourselves what’s about to come to life here, and it’s remarkable,” said Donohue. “A special thanks to Governor Andrew Cuomo whose leadership on this effort has been significant. For years the convention center was just a dream; now look how far we’ve come.”

“From the implosion of the old Wellington Hotel annex, to the first concrete being poured and the raising of the final steel beam, great progress has been made to keep us on track to welcome our very first event,” said Belber. “We’re one step closer to opening this state-of-the-art convention center, and we thank our team, construction partners and vendors for helping us get to this point. We look forward to sharing this space with the local community, greater Capital Region and visitors.

When completed, in each stabilized year, the Albany Capital Center is expected to bring an additional 150,000 attendees to the Capital Region and have an estimated economic impact of $36 million, including important fiscal benefits of nearly $1 million annually for New York State, Albany County, and the City of Albany.

Opening in March 2017, the Albany Capital Center, operated by leading venue manager SMG, is a modern, premier event and meeting destination in New York’s culturally rich Capital Region. Connected to the Times Union Center, Empire State Plaza and Renaissance Albany Hotel via enclosed walkways, the convention center will host a diverse array of trade shows, consumer and social events, and meetings for up to 5,000 guests. It will boast 22,500 square-feet of ballroom/exhibit space, 6 meeting rooms with 9,200 square-feet of space, and 13,500 square-feet of pre-function space, state-of-the-art technology, and impeccable dining options. The ACC is conveniently located in downtown Albany and within walking distance to the New York State Capitol, business and warehouse districts, performing arts venues, museums, shops, restaurants and nightlife. For more information about the Albany Capital Center visit www.albanycapitalcenter.com.