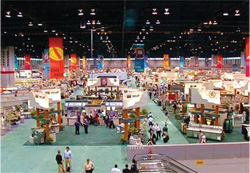 The MPEA Interim Board has recommended to the general assembly that MPEA become a public employer for some period of time, so that new agreements can be worked out with show labor, under binding arbitration, if required.

The Interim Board of the Metropolitan Pier and Exposition Authority (MPEA)voted in April to approve its final report to the Illinois General Assembly. MPEA Chairman John Gates called upon lawmakers to enact the entire package of recommendations by the Interim Board, to have a meaningful effect on competitiveness at McCormick Place.


“We believe that enacting these recommendations, holistically, is absolutely necessary to protect the 66,000 jobs and $8 billion in economic benefit provided by the Illinois convention and trade show industry,” Gates said. “Adopting only portions of these recommendations will not be sufficient to make McCormick Place competitive and meet the expectations of our customers. As of today, there are five to twenty shows that are anxiously waiting for the legislature to act before they decide whether or not to move their shows out of Chicago.”

The Interim Board made the following four recommendations:

• Make all tradeshow labor workers public employees to allow the renegotiation of contracts and eliminate costly work rules not experienced by customers in other venues.

• Restructure the capital debt to save as much as $50 million annually to help cut prices to customers.

Customer complaints have centered on the hassles and costs of labor work rules. A study by C.H. Johnson Consulting concluded that current work rules add 10 to 15 jobs per show with non-working stewards, standby labor and restrictive overtime and double time windows not experienced by customers in other venues.

Using the example of the International Plastics Showcase, which fled Chicago last year over work rules and costs, Johnson said those 10 to 15 jobs cost Chicago 269 full-time equivalent jobs among union tradeshow workers and in the hotel, dining and retail sectors. Approximately, $1,859,000 in tax revenue was lost.

The MPEA Interim Board has recommended to the general assembly that MPEA become a public employer for some period of time, so that new agreements can be worked out with show labor, under binding arbitration, if required. Most show labor unions are employed by private contractors and are governed by area-wide agreements that MPEA is not a party to. Only electrical workers are currently employed directly by MPEA.

“The Interim Board has laid out the critical factors that need to change at McCormick Place,” Gates said. “They are all critical, and only the legislature can make these changes happen. If they don’t, Chicago could well become the Detroit of the convention and tradeshow business.”