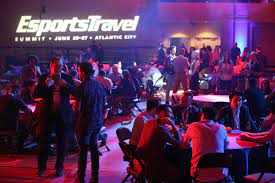 The world’s largest gathering of esports tournament and video-game organizers opens in the City of Champions today, as the 2021 EsportsTravel Summit, presented by SportsTravel and hosted by SportsPITTSBURGH, will be held at the David L. Lawrence Convention Center (DLCC) through Dec. 16.

Produced by Northstar Meetings Group, the Summit is the only event of its kind for esports tournament and event organizers. It focuses exclusively on video gaming and its positive impact on travel and events, facilitating partnerships between esports organizations and destination marketers, hospitality industry representatives and other event suppliers who want to work with and learn more about the rapidly growing esports event industry.

The meeting is a result of a partnership between the Local Host Committee, comprised of: SportsPITTSBURGH, Allegheny County, the City of Pittsburgh, Point Park University, the Pittsburgh Penguins, the Pittsburgh Knights and The AbleGamers Charity.

“Pittsburgh is incredibly honored to welcome the 2021 EsportsTravel Summit, as our region is committed to the future of the esports industry,” SportsPITTSBURGH Executive Director Jennifer Hawkins said. “From an Only in Pittsburgh welcome reception at Heinz Field to tours of our city’s iconic arenas and venues, Pittsburgh is ready to show esports tournament and event organizers why they, too, should host their next event in our legendary sports city.”

“We are thrilled to bring the 2021 EsportsTravel Summit to Pittsburgh,” Timothy Schneider, founder of the EsportsTravel Summit and chairman of the Sports Division of Northstar Meetings Group, said. “While the city’s storied sports history is widely known, Summit attendees will quickly realize that Pittsburgh is on the leading edge of the future of the sports and entertainment industries and a natural fit for the esports industry.”

Pittsburgh will be heavily featured throughout the two-day program, with 10 presenters having ties to the region, including:

Northstar Meetings Group will return to Pittsburgh for TEAMS Conference & Expo 2028, marking a 20-year anniversary of the group’s first visit in 2008.