The Marine Corps Scholarship Foundation awarded a scholarship after the late Earl C. Hargrove Jr., a Marine Corps veteran and the founder of Hargrove Inc., the Lanham, Md.-based event, tradeshow and exhibit design and fabrication company. 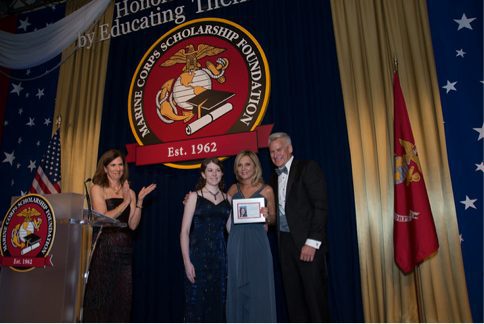 “We are humbled and honored to have a scholarship named after my father this year,” said Carla Hargrove-McGill. “We are even more ecstatic to present the Earl C. Hargrove Scholarship to Jessica Yount for her academic pursuits at Towson University. Jessica’s commitment to her education embodies the same commitment my father had each and every day to Hargrove, as well as to the Marine Corps and the families of the Marine Corps.”

Hargrove, Inc. donated the stage set and photo opportunity area for the gala, which took place at the Capital Hilton Hotel in Washington, D.C. Hargrove has been involved with the décor for the event and supporting the foundation for more than a dozen years, and this year’s gala raised $1,054,754 to support education of Marine children.